First off: I'm home from Puddletown. Christmas went off with very few hitches (and we are a family who loves our hitches).

But now is the time to look forward. I have good reason to believe that the next six months will bring a great deal of scurrying and exploding head syndrome at work, from the get-go, with no chance to pause and catch my breath. There are also some Very Good Things in the offing, though. And to prepare for both of these, I need to declutter.

Clutter, whether physical, digital, or mental, tends to make it impossible for me to work. I have a zillion and one three- to five-day tasks to get done in too little time. When that happens, my natural response is to practice denial about all of them. But, after many attempts, I've determined that this does not produce the desired result.* Furthermore, doing the Next Indicated Thing actually does produce results: The Thing in Question gets done, and I feel lighter.

So, today, on my arrival home, I am devoting myself to doing the major decluttering my physical and mental environments. This means 1) putting away the stuff from the trip; 2) sorting through the many piles of papers accumulated throughout my teeny apartment; and 3) making a list (long) of the tasks I need to accomplish in the month of January, and actually prioritizing them. The invisible 3b is for me to get started on the first of these tasks tomorrow.


*The desired result being that the elves swoop in and finish my projects while I sleep, leaving them done, proofread, and neatly printed and collated for my perusal. They also have yet to repair my shoes.
Posted by Notorious Ph.D. at 3:10 PM 4 comments:

Holidays in Blogland! (Presents for Everyone!)

I've just turned in the grading, and I'm doing laundry and tidying the house in preparation for tomorrow's trip to Puddletown. Have I done any of my holiday shopping? Yeah, well, that's what they get for holding Christmas so close to finals week.

But, I have managed to get my shopping done for you folks! So, let's see what everyone on my blogroll gets this year...


And every single overworked, exhausted one of you gets this:


*Corrected from "zyliss" -- they are the people who make fancy can openers, garlic presses, and the like, but not (so far as I know) camera lenses.
Posted by Notorious Ph.D. at 8:09 PM 11 comments:

Five days until I board a plane for Puddletown. Five days to grade, and maybe even buy a present or two. 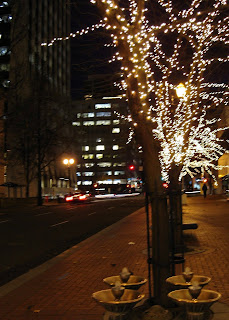 I have a bit of grading to do before that happens, of course. And a few other things, too. And my family and I always end up getting into at least one dramatic scrape over the holidays. And I hardly have any of my gift-shopping done. But still: holidays in Puddletown! Comin' right up! Nieces & nephews! Awesome bookstore! Tree-decorating with dad! Hot chocolate while walking down my favorite streets! All manner of festive shit!

A Tip for Would-Be Plagiarists

Tip: If every paper you've turned in thus far has been rendered in English that might best be described as "incoherent," it's not a good idea to turn in a final paper where the prose is not only elegant, but is also generously salted with phrases in Latin and Koine Greek, plus references to obscure eleventh-century texts.

And especially not when most of the passages come from a book on your professor's shelf, dealing with an area that you know she is conversant with.

If you really loved me, you'd do it.

Today, I'm on campus until 9:30. I have no food in the fridge, and have not had time to shop for a week. There is also no food worth eating on this campus. And I will get home around 10 p.m., and I will be cold, and there will still not be any food in the fridge.

Would one of my readers like to come by and fix me dinner, to be waiting for me when I get home?
Posted by Notorious Ph.D. at 6:12 PM 5 comments:

First: There's a bit of a plagiarism meme going around (see Flavia, Tenured Radical, and most recently, Dr. Crazy, for that sixth sense that catches things that the software misses). I've got an old post on the subject here, so I won't belabor the point, except to say that running across plagiarism makes my heart sink.

But I've got a nice thing to share, too. It may even be related to plagiarism, because I'm sure that at least some plagiarists take these drastic measures because they get up against the wall on a deadline, usually due to poor time management.* They see a paper that seems really big to them, and they put it off because it just seems too big to face today. And tomorrow, it's worse. And eventually, they're up against a deadline, and they either turn in a crappy paper, or get all desperate and do Something Rash.

If there's one thing that this writing group (along with bitter past experience) has taught me, it's that structure, and working incrementally on a regular basis, is my friend. Would this work for my students in a class where they work on a medium-length independent paper project? Sure, they have to turn in a proposal/bibliography, and then a revised proposal/outline, and there are conferences to keep them on track. But they could still put off the actual writing of the thing, with the results noted above.** So I worked up a little guide that I called "Writing Your Paper in Seven Days." I used that "Writing Your Journal Article in Twelve Weeks" book as a mental jumping-off point, and tried to think of the manageable daily chunks that a short-ish (6-8 pages) undergraduate paper could break down into, and I think I came up with something useful, and workable for even the most intimidated undergraduate. Every day has a suggested task, an estimated time-to-complete, a "what you'll need" list, and about a page of narrative instruction and tips. Bearing in mind that this is for students who have already developed a question and done the research, here's how it broke down:

I scheduled it so that the long day would fall on a weekend day. And I think this is adaptable for longer papers -- you'd just have to break the "writing your evidence portion" up into several days, each dedicated to a particular major section of their outline that represented 3-4 pages.

Granted, I'm sure that not everybody used it. And granted, I haven't started reading the papers yet. But I've had a couple of students tell me -- unsolicited, mind you! -- that this helped them organize their time and not let the bigness (to them) of the project intimidate them into putting it off until the last minute. So that's my big teaching moment for the semester, I think.

*And sure, some of them plagiarize as a first resort, because they lack ethics. Grrrr... But I think that some are potentially decent students who dig themselves into a hole and don't know how to get out except by cheating. My "solution" can't do a damn thing about the former group, but it might help the latter.

**One of them did just that. I know, because when he came into my office less than 48 hours before the paper was due, not having even developed a research question yet (much less having done any research or developed a thesis statement), he flat-out told me, three times in the space of 15 minutes, that he was "just going to stay up all night Wednesday and get it done," and that "It's not a big deal." And this morning, I collected his paper -- all one page and two lines of it, completely thesis-free. ::sigh::

(yes, the writing group is up: go here)

I'm not sure if this one is a parable. But it's what's on my mind right now, so here goes:

I've been practicing yoga in a studio (as opposed to at home) fairly regularly now for a little over a year, and about two months ago, I started experiencing some really encouraging breakthroughs. I can now do a simple arm balance that had been my nemesis for the whole first year. I can get into a headstand with a bit of assistance past the sticking point. I've regained a great deal of mobility in my formerly-frozen shoulders -- even the super-stuck left one. I figured out the caturanga-up dog transition without letting my legs drop. I have become aware of the things that are holding me back (::cough:: core strength!), and have determined to work on those things. Most importantly, I have learned that getting a pose or a transition requires being willing to fail at it for a while, without giving up.

One lesson that I apparently have not learned, however, is the line between "not giving up" and "forcing it." This came to a head this past week, as I tried to push myself to another breakthrough on a particular forward bend, rather than just letting it come when it comes. And the sad result is that tonight, I felt myself just a hair's-breadth away from giving myself a serious hamstring injury.

So, I actually did something smart: I stopped what I was doing. I decided that a little humility and backing off for a week or two was a small price to pay for not dealing with a painful injury and six months' recovery time. I know my practice will keep improving, if I give it time, because that's what's been happening already.

But goddamn it: accepting that I have limits is hard.
Posted by Notorious Ph.D. at 9:48 PM 5 comments:

Welcome to the end of Another Damned Notorious Writing Group! Congratulations for sticking with it to the end. We've had quite a run, no? Oh, and congratulations to Heu Mihi who, in addition to finishing a paper for her faculty colloquium, also spent the last twelve weeks getting a good start on another long-term project. (The coincidence of dates is suspicious, I know, but I promise you that ADNWG were nowhere near her.)

Heu Mihi's new project inspires me to use this last post to look forward, rather than looking back. Because, after all, writing is not like a class you take once, get through the homework, and move on. It's what we do. And hopefully, we've learned some things about that to take forward.

So, as you put in your Final! Reports!, here are a couple of ideas for things to contemplate, under the general heading of "heading forward":

In any case, that's about it. I'm going to close with a picture of a houseplant of mine, and a parable: 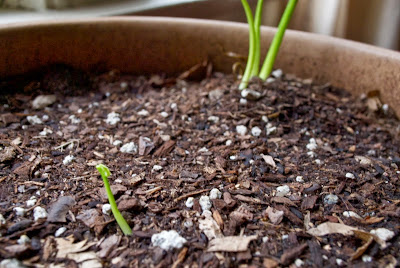 Regular readers will remember that I am a Notoriously Phytocidal Dame. A few months ago, as I was ready to throw out what had become yet another a pot of dirt, one teensy little shoot shot up, almost a month after the last sign of life had expired. So I replanted what turned out to be two rootstocks (one of uncertain status in the being-alive department) in a smaller pot, and spent a month with a single little stalk coming out of the one root stock that was definitely alive. And then, for a few weeks, there were two more shoots next to it. And then, Thanksgiving morning, I woke up to the first sign of life from presumed-dead rootstock #2. And though the plant is far from robust at this point, it's healthy, and I'm nurturing what's there, happy to see it every morning, and looking forward to more in the future.