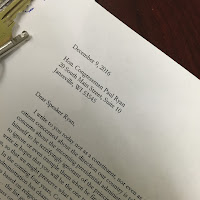 I haven't been writing much about writing. In general, writing is a frustrating process for me, and talking about how frustrating it is often finds me with my head further up my ass than when I began. Or, even worse, writing about writing takes away time that I should be using to write.

So it is with real pleasure that I share a bit of news. I may have shared at some point about "procrastivity" -- that is, procrastination, accidental or deliberate, that somehow turns into productivity.

This was not real procrastination. Rather, it was prioritizing a talk over writing my book. That's productive, sure, but not the thing I was supposed to be working on. But there it is: this semester found me plugging away at a "what I did on my leave" presentation for my department. I was supposed to present on my research for about 40 minutes, after which there would be another 40 minutes of Q & A, and then we'd all go home. It's actually a very nice thing our department does, and something you don't often find outside of research universities.

So I started writing. And here's the amazing cool thing that happened:

Early October: But then there's the question of audience: If my presentation is all medieval, then my colleagues (almost all historians of the 19th and 20th centuries) might find themselves at a loss for how to engage. So... Okay, I'll make sure to have a lot in there about approach and methodology and maybe even a little of that Cool New Theoretical Framework I've been trying to use.

Mid-October: This thing is getting kind of way to long. Remember THAT ONE PRESENTATION that never ended? You don't want to do that. Nobody ever complained that a presentation ran short after all. But I don't want to dam the flow. I'll just write it as it comes out of my brain, and the fact that it's about 8,500 words long is okay; I'll just cut it down for the presentation....

DID I JUST ACCIDENTALLY WRITE A DRAFT OF MY BOOK'S INTRODUCTION?

Huzzah for procrastivity!!!
Posted by Notorious Ph.D. at 5:25 PM 9 comments:

Labels: another damn book, procrastination, research and writing, something to celebrate

While we're burning the system to the ground...

Yesterday, the New York Times posted an op-ed by a Dallas elector who stated why he was going to refuse to cast his electoral vote for... well, you know the guy. The orange one with the alleged "hair." I wrote on the facebooks that I wasn't sure how I felt about this: I would be happy with the result, but this would basically further erode trust in an elections system that is already as frayed as one's gym underwear (come on -- don't pretend you don't know what I'm talking about).

But then I got to thinking, and I realized that this is a situation that has some merit to it. Here's my fantasy of how it plays out (and yes, I know this is a fantasy. But let me have it for a few hours):

See? This way, everybody wins. Well, everybody except one person. But I could live with that.
Posted by Notorious Ph.D. at 4:56 PM 2 comments:

So yeah, I'm concerned. And likely to stay that way for a while. I'm concerned that less than a quarter of this country's eligible voters have elected a sexist, narcissist charlatan who has shown a willingness to get into bed with racists, white supremacists, and white nationalists, and who either hasn't read the constitution or doesn't give a damn about things like a free press and the rule of law.

I'm concerned that the president-elect is more interested in appearing before a cheering crowd than actually doing the business of governing, which appears to bore him.

I'm concerned that the president-elect does not read, nor does he care to know anything that does not confirm what he already believes.

So I am resisting.

Part of that resistance is by keeping on doing what I'm already doing: by teaching, by underlining the importance of critical thinking, by refusing to give ignorance a pass. Part is mentally preparing for what I will do if confronted with injustice: mentally preparing myself to intervene. Part is writing checks. Part is volunteering to volunteer. Part is making calls, registering my protest with people who can make a difference. Reaching out to people who might be swayed.

Mostly, I need to make an appointment with resistance, and make it part of my schedule. Because human beings can adapt to the most atrocious circumstances, and decide that the unacceptable is actually acceptable. And it's not.

So I hereby declare "Resistance Fridays." Every Friday, I will report an act of resistance, small or large, a concrete measure I have taken to push back against the unacceptable.  I have no illusions: I know that most outcomes will be losses. But I can't not fight back. And dedicating some time, once a week, to resisting will remind me to stay in the fight.

Here is this Friday's act:

This week, the news is full of reports of how the incoming President's business holdings make him vulnerable to quid-pro-quo arrangements. He will have the power to appoint the head of the National Labor Relations Board, an organization that is currently ordering him to correct violations of federal labor law at his hotels. He will appoint the next head of the Justice department, a federal bureau investigating financial malfeasance of Deutsche Bank, a financial institution holds millions in Trump family loans. He continues to lean on Scotland about wind farms that, according to him, mar the view from the Trump golf course. And, of course, there are the foreign diplomats flocking to stay at the Trump Hotel on Pennsylvania avenue -- a property that Trump leases from the federal government, under a contract that states that no federal employee may profit from the lease.

I would not worry about his dealings now if he had even an ounce of shame. He does not. If he is not stopped, he will continue to bleed the country dry for his own benefit. It's unethical. It's shameful. It's gross.

Yet there have been two rays of sunshine in all this. The first was the Office of Government Ethics' masterful Twitter-trolling of the Troll-in-Chief, right down to imitating his diction and punctuation. The second was that the Senate introduced a resolution urging His Orangeness to divest.

I'm down with that. So my Friday act of resistance was to write both of my senators, thanking them, and my Representative, asking him to sign on if such a thing came through the house -- or maybe to propose something himself.

Resistance Fridays: Make it a thing.
Posted by Notorious Ph.D. at 2:31 PM 2 comments: