After over two years of construction/retrofitting, we have new! classroom! buildings! Actually, the buildings are old, but they were completely gutted. They look much nicer, and are reportedly much safer. But there are issues...

Because Grit City is located in a (mostly) warm clime, these buildings are constructed with doors leading directly to the outside, rather than to an interior hallway. To protect expensive equipment inside, the doors are equipped with key-card locks. Once doors close, they can only be opened from the inside; one needs a key card to get in from the outside. Propping them open is impractical because they open onto public outdoor spaces. And, we have been assured, this "causes aesthetic damage to the doors."

The problems with late-arriving students are likely something you're all imagining, and you wouldn't be wrong. But then there's this:

"A report circulated this week that a faculty member was unable to exit a classroom due to a malfunctioning door lock.  The problem was unrelated to the lock; rather, the door in question was found to swell when in direct sunlight such that it wedged against the door frame.  Construction Management was notified of the condition and resolved it with the contractor... In the unlikely event that this problem recurs, turn the door handle and apply sufficient force to open the door."

I believe that I'll start bringing a portable battering ram to class.

It may cause some aesthetic damage.
Posted by Notorious Ph.D. at 3:59 PM 7 comments:

With one exception, I haven't taken science classes since I was 15. Yet I love science books. I wonder if I could do an actual college-level science class. Is the fact that I'm a historian really due to innate skill in one area versus another? Or just some random result of taking one fork in the road instead of the other? If I'd applied myself in another direction, could I have been successful in this other field?

Hypothesis: The same combination of intelligence and dedication can make one equally successful in two diverse academic fields.

Step 3: Develop and perform an experiment to test the hypothesis:

3.a: Enroll in my friend's "Biology for science majors" course.
3.b: Do work
3.c: take quizzes and exams

Step 4: Record and analyze results to see if they support (not "prove" -- I learned that last week!) the hypothesis:

On the first 13-question chapter quiz, on the chemical basis of life, I answered 8 of 13 questions correctly. Two of those correct answers were lucky guesses.


Results: the results of this experiment do not seem to support the hypothesis. Possible reasons:

Labels: Notorious goes back to school

No, not that kind of interview.  Yesterday, I was interviewed by a sixth-grader about what professional historians do.

It was one of those things that kind of gets dumped in your lap. In my case, it fell to me because I was the only one in the office when the call came into my chair. Sure, I thought: why not?

It turns out that the young woman in question was delightful. She had fallen in love with ancient history, and when she was given the opportunity to do a report on a profession for extra credit, she thought of finding a historian. Her mother helped her by making the initial call, but after that, the young woman took charge.

So, what did I tell her? Well, I told her that my job mainly had three parts: teaching, reading, and writing. I told her that you needed to learn lots of languages to work in ancient or medieval history. That most of my research was done in archives, which are like libraries with lots of old, scribbly documents. That my favorite part of the job was that I got to learn new stuff all the time, and that my least favorite part was grading papers. She told me she liked history, but some teachers "only want to study boring stuff like names and dates." I told her that I felt exactly the same way.

When she asked me what my advice was for someone who might want to be a writer (she had written 42 pages of a story about a girl who turns into a wolf and protects other wolves), I told her "write every day" and "read a lot of what other people write." When she asked me if her mom was right that she should learn to type, I told her that my mom had made me do the same thing, and that it was a skill I used in my job every day. And I told her not to be afraid of coming out with the wrong answer, because if you're right all the time, then you're probably not learning anything.

And then today, she sent me a very nice thank-you note.

Who knows? There might be hope for humanity after all.

I've done it to myself again

Remember when I took that Don Quixote course? In Spanish?  At the time, I predicted that it would both improve me and really complicate my life. I was right on both counts: I'm here to tell you that DQ is probably the best novel ever written... and that taking a course while teaching full time and trying to write your own book is going to make things very silly. 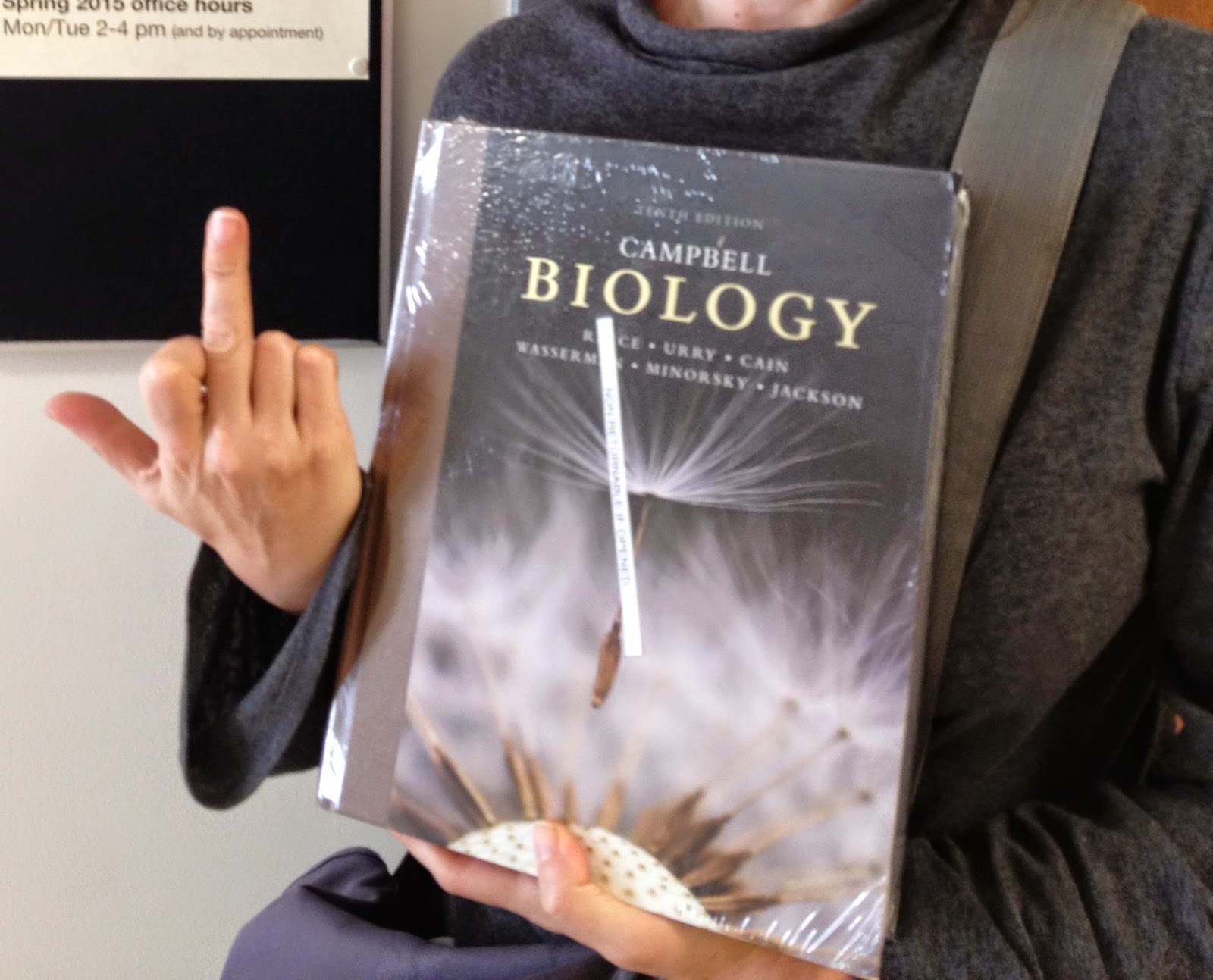 I'm not 100% sure who that finger is for. Probably for the voice in my head that, once again, convinced me that this was a good idea.
Posted by Notorious Ph.D. at 8:34 AM 3 comments: