... to my presentation for the seminar at Hogwarts. Less than a month now. So, yeah: probably not much posting will be going on here. Hang tight; I'll be back with more adventures soon.
Posted by Notorious Ph.D. at 8:50 AM 1 comment: 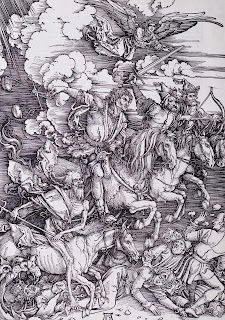 Quick quiz! Name the four horsemen of the apocalypse! No googling!

Okay, so it turns out that it's surprisingly contested, especially the identity of horseman #1. The original source (the Book of Revelation) has been interpreted a number of ways. But in the popular tradition, there's Pestilence (or Plague), War, Famine, and... Death.

I got to thinking about this because I'm researching one of the other horsemen. And I have to admit I've always wondered about Death-as-Horseman. Death is the only one that the original source material actually names by name. And yet it's the one that makes the least sense. I mean, isn't death implied in the other three? Is this just a case of gilding (or wilting) the lily?

Because, if not, then it sort of implies that War, Famine, and Pestilence maybe are serious, but not, you know, deadly-serious. Like maybe Famine is really more along the lines of "that feeling you get when you forgot to pack a lunch and have convinced yourself that you can make it until dinner time but now it’s 4 p.m. and you’re wondering if anyone will notice if you take something out of the employee fridge." Maybe Pestilence just turns out to be a bad rash, and you realize that you probably only need a little hydrocortisone ointment.

And then Death arrives late at the party, and is all like NO WE ARE NOT SCREWING AROUND PEOPLE.

These are the things I think about.