I don't know what plans you perused, but one of our emeriti was on the original planning committee and he hates hearing the parking-garage story. According to said emeritus, the story of why the funds ran out and a new design had be sought (before the foundations were laid) is because an administrator had neglected to make a bid for matching federal funds for the project. This is sadder than the urban legend...

So, I went back to my source material. And it seems that there are bits and pieces of potential urban legend indeed mixed in with my recollection. So, for the first time, I'm fact-checking one of my own posts.

I think that covers it. And I maintain that the current building serves as an Ozymandias-like monument to hubris. One last question to Pedantic Prof., who appears to be on the ground: So, does your source say why everything is so twisted? Is there movement going on? And more importantly: have structural repairs been made?

Most importantly: Do you have a window?
Posted by Notorious Ph.D. at 9:21 AM 6 comments:

A couple of pictures of that building

I really wish I could post pictures of the outside of this building, so you could see it in all its cheap faux-brutalist glory, but that would identify it.  Instead, I bring you a couple of interior pictures, snapped a few years back. Both of these come from the floor where I had my underground office for 5 years. 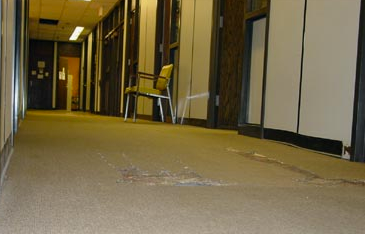 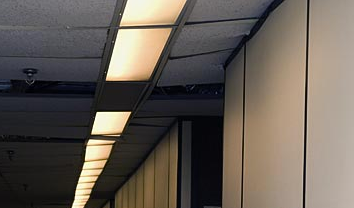 Grim, no?  I understand that some of this has been abated. One can only hope.

The Ugliest Building on Campus

Note: Prompted by a comment by Pedantic Prof, I have just fact-checked the holy hell out of my own post. Results are here.


Thesis statement: the ugliest building on campus is almost always the Humanities building.  And if it's not, then Humanities is usually in the top 3 ugliest.

Historiann mentions her building in her post today on why national reputation for scholarship may (::gasp!::) be even better than a winning team. Yet in spite of this, which gets the better facilities?  Here's her aside about her own building:


Let’s just say that although Clark is a notorious eyesore and menace to the health, safety, and comfort of its denizens (who include faculty, students, and staff, as it is a building with both classrooms and departmental offices), we didn’t get a $250 million renovation.  All we got was an exterior paint job (which helped to a surprising degree), a new HVAC system (because the old one kept flooding faculty offices!), and new carpeting in some corridors that looks like it was a remainder from the Carpet Barn.

Yup, sounds about right. And it's not just Baa Ram U., is it? Humanities buildings seem to have been designed by someone conducting an experiment on how architecture can drain your will to live. Permit me to illustrate with a tale from the horrific humanities building where I was a grad student. It will sound like one of those academic urban legends, and that's what I thought it was, even though I was there... until I saw the actual historic documentation of the original plans.  Fer reals.  So, here goes:

Way back in the 60s, the University of State decided that they were going to build an impressive building according to the model of the time. It was going to be of the most modern concrete! It would have its own underground parking! There would be a plaza out front, and a skyscraper tower with commanding views of the town and beyond! Yay!!! So they dug the foundations, and the two underground garage floors, and built the plaza, and the mezzanine, and got to work on the first tier of the skyscraper above.

Except... they didn't consult a geologist, so it came as a huge surprise when the building began to twist and move down the hill because the rock below turned out to be not strong enough to support even one story of concrete skyscraper.

What to do?  Why, cap off the one-story "tower" and convert the underground levels into faculty and grad student offices, of course!

Now, capping off the tower helped, but it didn't completely solve the problem.  No, siree. See, the thing was already pretty heavy.  So ever since that time, it's been ever so slowly continuing to twist and move.  This has resulted in (among other things):
And, of course, we all grew into pale troll-people.

And, of course, it continues to be ass-ugly.

So, how about you? Share your architectural horror stories in the comments below! And bonus points to people who don't know who I am who can identify (in code, please) the building I describe above.
Posted by Notorious Ph.D. at 2:31 PM 30 comments: