That's (Full) Professor Notorious to You

Yesterday, one of the things on my to-do list was to go through the piles of papers and stacks of accumulated mail for the past two weeks that the semester end + kalamazoo + grading had kept me from. In there, I found a notice of an overdue bill payment (seriously, I just plain forgot!), and...

notice of my promotion to full professor.

Labels: academentia, something to celebrate

How the Second-Book Fellowship Year Began

Let's kick this right off, shall we? Not content with reveling in the thought of the academic year off, I've decided to think about how my fellowship actually began the minute I submitted my grades for this past semester. In fact, I actually gave that last senior portfolio a kiss when I picked it up.

Of course, the first 48 hours of my leave have been less than spectacular, given the fact that my Kalamazoo cold is still lingering, to the point where I only go out in public if I can maintain a three-foot distance between myself and the nearest other human being. The week-long sore throat is gone, but my apartment looks like the place where Kleenex go to die.

Still, I'm not too troubled. I count on a full week to ten days at the end of every academic year to be sick, get well, and be a couch potato. So that's what I've embarked upon. There have been TV shows (Game of Thrones and The Fall, in case you're wondering), there has been a great round of long-delayed self-care appointment-scheduling (dentist, hair, chiropractor, massage, orthopedist, etc), and there has been gazing at the piles of papers and two weeks' worth of unopened mail and wondering whether today has been the day I'll tackle it.

My goal is to enter June with a clean-ish, organized-ish home and office, so I can set about the business of really thinking about my summer research trip, in which I will, at long last, tackle the notarial archives, which are always a bitch to sort through.[1]

And now... I think I need to get at least one chore knocked off my list.


[1] Oh, and about that research trip: since my secret identity is less secret with every passing year, I'm probably no longer gonna be quite so guarded about what I'm working on. You may even see pictures from Blarg City that clearly identify it. I will, however, continue to make up and insist on pseudonyms for people and places (myself included) -- purely because it amuses me to do so.
Posted by Notorious Ph.D. at 3:45 PM 5 comments:

Labels: another damn book, body, something to celebrate

Open letter to my students:

Congratulations! We have all survived yet another semester. Ring out, wild bells! Yet for some, this will be an anxious time, for you're awaiting your grades. You're wondering why I haven't sent back your papers yet, or why the final paper & exam categories haven't been filled in. You'd also wonder about the hour-long gap between me finishing grading and posting the final grades, if only you knew about it.

So here's a little secret, something that many of us proffies do for our undergrads that you may not know about: If you've shown consistent effort and/or improvement over the semester, we spend that extra hour or so scrounging around the gradebook, looking for somewhere to find you just one more point if it will push you into the next-highest grade levels. Because we recognize that numbers don't tell the whole story, and that a gradebook calculated down to the quarter-point out of 100 doesn't weight for improvement or one little silly mistake on a quiz because you were tired but you remembered walking out the door...

Because mostly, though it may not seem like it, we really like you, and we're totally on your team. And we want you to have a good summer.

Oh, end of semester, why do you do this to me? You should be a time full of joy, yet inevitably, you make me sick as a dog. This semester's iteration hit me Thursday night at Kalamazoo, abated for a while, and then came roaring back this morning. Who/what to blame?
Ah, well. It means I'm trying to finish grading while my head feels stuffed full of oily rags and my neck aches. In lieu of a real post that I was contemplating about people who ought to know better but still try to squeeze a 30-minute paper into a 20-minute time slot, let me simply include this picture, as proof that, in a brief hiatus from feeling crappy, I went to the Kalamazoo dance and shook my butt with eminent historians: 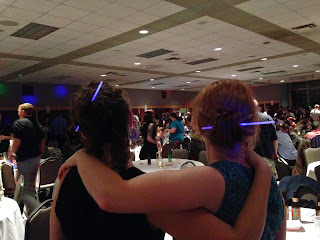 Report from the 50th Year of Medieval Camp

The International Congress on Medieval Studies — more commonly known by some form of the name of its location in Kalamazoo — is, so far as I can tell, unique among conferences. And like unique foods or persons, it is not to every taste. But I happen to love it.

For those of you who have never been fortunate enough to see us in action, let me give you the rundown: 50 years ago, lore has it, a group of Midwestern medieval studies scholars, frustrated by the exclusivity of the Medieval Academy of America conference (which remains rather difficult to get a spot on), founded their own conference to be held at Western Michigan University in Kalamazoo, inviting people from all disciplines of medieval studies. That first conference had six panels. Today, it is a three-and-a-half-day conference, with just shy of 600 panels (no, that’s not a typo: six. hundred.) Historians and literature scholars (especially English lit) dominate, but there are art historians, musicologists, panels on pedagogy, meta-panels on the idea of “medieval” in general.

And yes, we go to these panels. Lots of them. But in between, there are lunches, coffees, business meetings, a fantastic book display… and lots of wine hours and publishers’ parties/open bars etc. And a dance Saturday night.[1]

Did I mention that a large proportion of the 2500+ attendees stay in the WMU dorms? With shared bathrooms? Yeah… it’s basically summer camp for medievalists.

Given all this, you can understand why the ‘zoo is a polarizing conference. Some hate it and will never go, because they perceive it as being less serious. Okay, I get that. There’s probably more socializing than sitting in panels. There’s also a lack of exclusivity: grad students are on panels with tenured scholars, and undergraduates have their own panels — several of them. And given the vast amount of free-flowing alcohol, there is a certain letting-your-hair-down that one doesn’t see at other conferences.[2] Layer this on top of the general weirdness that all medievalists bear like a scar or a badge of honor, and it’s an odd, odd conference.

Those of us who love it would have it any other way. This year, in addition to doing a bit of mentoring of grad students & junior faculty, I’ve congratulated a friend on the appearance of her book in proofs on the Penn Press table. I presented a paper that is part of the book and that forced me to Think Big Thoughts. I’ve seen panels on foodways, on famine, on imprisonment, the state of gender research in Medieval Studies, and on the meaning of medieval studies in general. I’ve had several meals and amazing conversations with people I rarely see, and with whom I discuss serious scholarly things, and laugh myself silly, and generally feel like I’ve come home. And yes: tonight I’ll be going to the dance.

Happy 50th Birthday, Kalamazoo. I’m having a blast. And yes: I will be back.

[1] Folks sometimes ask me “oh, you mean you do medieval dances?” No. We dance. Like at a middle school dance. With about the same level of social skills. But more alcohol.

[2] I have heard that there are a number of Kalamazoo hookups. In the dorms, no less. I’ve never experienced such a thing myself, nor to I know anyone who has (or at least who admits to it). But I totally believe it’s true.

Any medievalists going to K'zoo this year? Is there a blogger meetup? Someone clue this old-school blogger in.

And chances are you'll find me at Mug Shots at least twice on any given day...
Posted by Notorious Ph.D. at 4:32 PM 3 comments: