Does your end-of-semester grading have you in Babylonian captivity? Are you suffering a black plague of "medieval pheasants" in your essays? A great schism between the fun person you used to be and the jaded academic you've become? What seems like a hundred years of war between you and That One Colleague (let's call him "The Black Prince")?

Sister Notorious knows your pain. And she has a solution. A retreat center. Where we can all speak in Latin and drink unaged wine and let the serfs take care of all that pesky day-to-day living stuff.  Presenting the new site of our Home for Wayward Medievalists:


This is, I swear to you, is an actual property you can buy. And it's actually a bit of a steal. And located near a stretch of the Oregon coast, which is just the thing to recall the damp of England or Brittany.  On the down side, there is everything else.1 It's like a Renaissance Faire got drunk and took up interior decorating and forgot that there were such things as different historical eras between the thirteenth and eighteenth centuries. This particular decorative mode might be described as "back in the day."

Which, I think, makes it just the place for medievalists suffering from end-of-semester loopiness to retreat to. Perhaps with a cask of artisanal hypocras.2

Scroll through the photos and see for yourself. But be warned: you can't un-see it.

1 I will confess to loving the kitchen. Though I'm not sure that a faux-tapestry runner is the best food prep surface.

2 It's only an hour or two from Portland, and even closer to Eugene, and if there aren't hipsters there brewing up mead at the very least, I'll eat my fancy medieval headdress.
Posted by Notorious Ph.D. at 8:50 AM 12 comments:

Large to Small, and Back Again

About a month ago, I switched tracks from the chapter I put to bed (ready or not) so I could distill a paper from it. Anyone who's been reading my agonized posts knows that this chapter has been giving me fits. It was chock full o' facts, and even finally had an argument, but it just felt... flat. No, worse: it was simultaneously flat and bloated. How does that happen?

In any case, a few weeks ago I made the decision to put the chapter to bed. It was a draft; it had a beginning, a middle, and an end. I knew where the holes were, but I knew they could be filled later, and I didn't want to spend another month tinkering with it right now. Besides, I had a deadline: I had a paper to present at the Brain Ranch (not Hogwarts, but nearby) in three weeks, and I had to somehow condense something from the flat-yet-bloated chapter into 25-30 nice, tight, coherent minutes. Oh, and I had to make maps and genealogical charts.

I've always worked from small to large. I write a conference paper or two or three. Sometimes I expand them into articles. But probably a third of my first-book manuscript originated as conference papers. These gave me concrete deadlines and forced me to dig in and argue.

Here, I was trying to compress something big and sprawling into something short and compelling. And it was hard. I kept excising things. But here's what happened: that excision process forced me to think: "I've only got 12 pages. What's really important here?"

And in the process of writing that short paper, I finally discovered my chapter.

Labels: another damn book, research and writing, something to celebrate

Historians are -- some of us anyway -- notoriously bad at names and dates. We know what came before and after and in the midst of what, so we can make some inferences about causality. But what makes a history major or a professional historian different from a history buff is that our main questions are not about  "what" or "who" or even "when," but "why." Why did this thing happen? We also like "so what?": Can our answer to the "why?" question make us understand the past and maybe even the present better?

This is how I encourage students to be history majors: because the study of history, done correctly, beyond being fun, makes you think about how various factors and impulses and circumstances and even chance encounters might add up to Something Important. Granted, not every bit of history is All About Us. Likewise, similarity is not identity: we are not living in the last days of the Roman Empire;1 no one is Hitler except Hitler. Looking for the lesson can sometimes distort what we see, if we try too hard to read the past through the lens of the present.

But when there is a lesson, we ought to pay attention.2 "There," we say, "was a moment where we, as a human race [or country or gender or whatever] were at our best." "There," we say, "is where we screwed up, and we need to take a long, hard look at that, not to beat our breasts, but to become better." We can look at the past and realize that there are factors out of our control, but there are often choices: moments where we, as individuals or groups or societies, have options with how to deal with the circumstances handed to us. And yes, history will judge us. It always does.

And what happens when we don't study history with an eye to the "why"? This:

"Anticipating the criticism [of his proposal to ban all Muslims from entering the country], Mr. Trump compared his plan with former President Franklin D. Roosevelt’s proclamations during 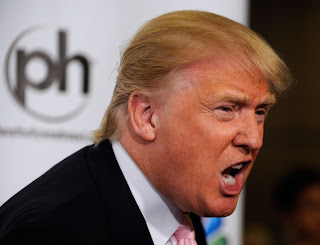 World War II that labeled Germans, Italians and Japanese “enemy aliens” who could be detained in the United States.

"Mr. Trump referenced the proclamations specifically, noted that people were stripped of naturalization proceedings and not allowed to use radios and flashlights and praised Mr. Roosevelt in an interview with ABC’s “Good Morning America” program. 'Look at what F.D.R. did many years ago,' Mr. Trump said, 'and he’s one of the most respected presidents.' ”

Having the facts of history without reflecting on what those facts mean makes us dangerous.


1 No matter how much Niall Ferguson thinks this is the case.
2 For example, I regularly teach courses on the encounter between medieval Christianity and Islam, and am forever trying to dismantle the whole "clash of civilizations" thing. Sometimes it even works.
Posted by Notorious Ph.D. at 8:56 AM 3 comments: