Still Alive, and a Music Suggestion

As Gregory of Tours said, at the beginning of his 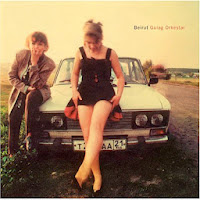 History of the Franks, "A great number of things have been happening; some good, others bad." Which is my way of apologizing for lying down on the blogging job. I promise an update in a couple of days.

In the meantime, allow me to make a music suggestion: "Gulag Orkestar" by Beirut. Imagine David Byrne collaborating with a gypsy caravan to make a soundtrack for a Sergio Leone western. Add some euphonium. Stir.

Yes, they have a more recent album ("The Flying Cup Club"); if you're a fan of French folk music, you will like it a lot. But G.O. is my recommendation, and I'm sticking to it. Plus, the cover photo (found in an old volume of Russian photography in a library in Leipzig) is just pretty neat.
Posted by Notorious Ph.D. at 5:59 PM

Oh, a friend just gave me one of Beirut's CDs. I haven't listened to it yet, and I'm not sure which one it is, but now I'm especially looking forward to it!
Hope to talk to you soon!

Are fans of French folk music a large group???

Hello my friends
Music is the thing that connects people all over the world, there are many genres of pop, hip hop, dance, I'm a music collector all over the world. I use the default songs and edit Make mp3 ringtones for your phone, with the many different languages in ringtones. I need you to enjoy the ringtone I created at my app, take a look at:Download
Here are some small mp3 audio suggestions:
Tula Pahate Re ringtone download
Laung Laachi ringtone download
Snoop Dogg ringtonedownload
devak kalji re ringtonedownload
Tera Fitoor ringtone download
I hope you introduce the ringtone that I created for your friends.