How on earth did I let this happen?

As longtime readers will know, I'm a late but enthusiastic convert to daily writing. I have been known to opine that writing is like any other exercise: you get stronger with daily practice, but weak and out of shape the longer you're away from it.

This week, I've been forced to confront what happens when you stray from your project for years.

How it happened: Back in 2010, I had a decent idea for a project. I did a whole bunch of archival research, transcribed a whole bunch of documents, saw a project taking shape. Over the next couple of years, I put together a few conference papers, and continued to spend a month of each summer in the archives, collecting (and sometimes transcribing) documents. But a strange thing happened: by the time I'd return from these multi-week collecting trips, I'd be exhausted. "I'll just give myself a week... or maybe two... to recover." Perfectly reasonable. But then, it's August and I realize that I've done no course prep whatsoever. "Okay, so I'll write a bit during the semester." And there would be another conference paper. But other than that, very little forward motion.

In the meantime, I forget what I've collected, to the point where I not only have little idea of what I have, and even less idea of where to find it. Was it on the work computer? The home one? Did I accidentally delete it? Why do my two computers seem to have two separate filing systems, and the document files don't always coincide? AAARRRGHHH!!!

All of which could have been avoided if I'd kept working on the damn thing.

So now, here I am, fired up with what I think is a really good idea for how to put this book together, and ten travel-free weeks to do it in. But before that can stand any chance of happening, I need to dig into what I have and try to make sense of it all. So far, I'm on day two, and I think I've got one machine sorted out. I'll be digging into the other one after that.  Wish me luck. 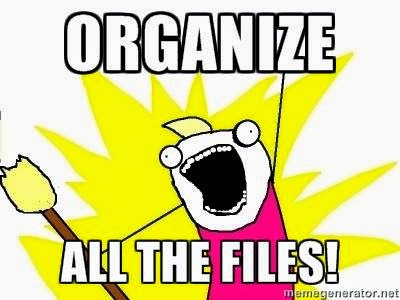 Ugh, I totally do that too! On the plus side, the final product after *cough* 10 years is probably better than it would have been if I hadn't had to keep going back to it trying to figure out what I did and where I put things. But I'd rather have those 7 years back! (Don't be like me...)

Yeah, I do that too. But hey, the article I did that with multiple times just came out after *cough* 7 years, and I'd like to think that it's like a fine wine... better for having aged for awhile. (Seriously, it's way better than what it would have been when I first started writing it).

I'd just like the *next* thing to not take 7 years.

As someone who has just (tonight) finished cataloging the document photographs she took last summer *cough cough* I am not sure I understand the problem here.

I keep almost all my files on dropbox, so it means I don't have to worry about what's on the work computer and what's at home. But older files are a nightmare.

I have an auto backup that will only backup files, not the folders into which I put things. So the backup, which holds my life, is a huge cache of files... and somehow I haven't yet figured out how to organize those into folders that might mean I could actually find things....