The Soundtrack of Scholarship

I know from experience that earplugs actually serve me better in terms of directing my focus inward. But sometimes work is better with music.

When I'm reading or writing, I like things with no words, or in words in a language I don't understand. NO CRESCENDOS. So something like piano sonatas, or even modern composers, or baroque choral music in Latin? We're good. Hell, even tibetan chimes/singing bowls, if it's early and still dark. Chopin nocturnes for when it's actually nox.

But occasionally, scholar-ing is a bit more active. Physically active. Like today, when the Hogwarts butler commandeered a giant chalkboard for me and I spent two hours making this:[1] 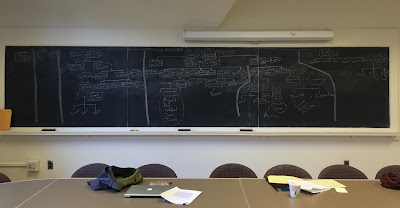 I puttered at it for a while, unsatisfied, but really picked up the pace and started enjoying myself when I found the right music. If you're familiar with either of Bob Mould's projects (Hüsker Dü or Sugar) that bracket his two solo albums (Workbook being a lot mellower than BSoR), you'll understand the sort of "I am not leaving the room until I kick this project's ass" mood that I was in. It was also a great relief to be physically moving, stalking from side to side of this board, standing back to see the whole thing, and occasionally getting into the music a bit -- not quite a dance break, but about as close as one gets with a bit of hard-rocking post-punk. So, on the off-chance that you have some more kinetic scholar-ing to do this weekend, enjoy:

[1] "This"  being a version of the genealogy of the medieval family that I was complaining about in this post. Believe it or not, this is far from complete: I had to leave out about half a dozen maternal lines because they added lines and messes on the board making the whole thing even less legible than previously. I settled for appending the brides' natal surnames -- something that medieval documents never do,[2] but that at least let me see what lineages were being brought together.

As far as all this mess goes, I'm really interested in the middle lineage, and in particular in a guy in the middle of the middle. But I was somehow driven by an urge to understand how it all fit together. So I made a Thing.

[2] ...except in a one very nifty case here in which the maternal surname becomes the surname for an entire branch of the lineage, for reasons that would make a very interesting research paper, I think.

Fie upon this quiet life! said...

I love family trees. They are indispensable when working on chronicles and history plays. :)

The kinds of music you describe (no crescendos, etc.) is exactly the kind that I put on Internet radio or Pandora on order to work.

Fie upon this quiet life! said...

Another thing - I have a playlist on my phone called "Work Mozart," and it has several Mozart pieces on it that I can listen to on repeat, get in the zone, and get work done.

I love this. I had a professor who reported that he had once -- in a classroom with chalkboards on two walls -- done the Hapsburg genealogy in the 16-17th C, including colored string to connect the two walls.

Sometimes music is very good for mental refreshment during work, it also very helpful for creating mind,s works .we can made mind an active with the help of slow and sweet music and made an active body with the help of a favorite type of food but I like chocolate in a panic situation. This is a very helpful site for all types of users for Who wants to create a blog for the explain knowledge and skills in front of the other people who seek the knowledge for the improvement of the skills.

When I am reading and writing any information then at that time I listen to slow music. I like this type of music during work, it creates a motivating force in the human mind and feels the freshness in the bad feeling of mind. Check and take action in this link www.punctuationcheck.org/english-punctuation-checker-the-perfect-solution-for-those-for-whom-english-is-not-a-native-language.

This is an amazing post and tells him the truth of the reality some time we have not focused mind due to the illness of the mind then http://www.paragraphchecker.com/paragraph-fixer-online/ at that time music has a great source of freshments and at the time we can create many things in our minds.

In this post, the writer tells us about the experiences of the life of the end of the semesters and these experiences share https://www.paraphrasingservices.org/15-paraphrase-tools-to-make-your-content-writing-easier with you in a very gentle manner. The writing style of this post is very amazing and interesting.