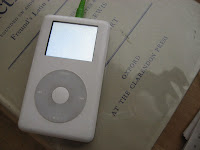 Today, my iPod gave up the ghost.

It was probably about time. The current 'pod (my second) was a gift from my then-boyfriend, meant to replace one that had been stolen while on a research trip (the iPod, not the boyfriend). It served me well, lasting two years longer than the relationship itself -- though the inscription on the back was awkward to explain, post-breakup, to people who saw it and asked about it.

The inconvenient part is that the device crapped out just as I was two weeks into my biking-to-work. It's a four-mile ride, with a hill at the end, so the music helped (though probably made the ride less safe). My plan is to replace it with a nifty and smaller Nano, but I can't afford it this month, and I've already got too much on the credit card.

So now, I guess I'll have to sing on my ride to amuse myself.
Posted by Notorious Ph.D. at 9:33 PM

Will you be singing show tunes? I think it was considerate of your iPod to wait until the new iPods were announced, actually...

Riding with headphones? No!! Tantamount to riding sans helmet!!

Okay, none of my business, but I'm a bit of a bike-safety enforcer. And also a bike-safety hypocrite, since I don't actually wear a helmet when I ride around town.

Perhaps you should therefore ignore my hypocritical chastisement. Enjoy your riding! Sorry about the ipod!

Okay: A) riding while listening is no good, though I will say that I watched people in Cambridge last year riding while listening and texting, all at the same time. It never seemed so smart, at all. But also, biking without helmets! is! worse! I always want to go out without my helmet, but I think, I'd never go anywhere in my car without my seatbelt buckled, and this is just as bad!

B) with Notratched: at least it happened the day *after* the new ones came out. Now you can choose a hep new color.

Barukh dayyan ha-emet. BUT: driving with the earphones? Are you nuts?! But, if it's any consolation, my trusty little shuffle vanished when I lost track of all my belongings in an airport security control (laptop! three phones! the usual assortment of books, newspapers, keys, pens, cards, papers, food etc....)... still... I'm glad you have no money to buy it now, I'll have less to worry about *shaking my head here*