I'm a little sorry that I volunteered to host Carnivalesque, 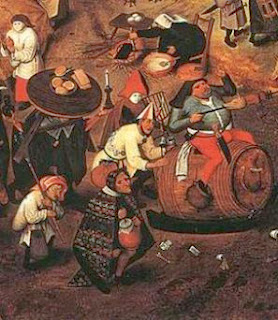 because it's shown me how much really interesting stuff there is out there that I haven't read. As if I weren't already feeling guilty about that with books.

In any case, I got about twice as many suggestions as I could use – an embarrassment of riches! – but I saw a theme begin to emerge, and decided to run with it. So now I present to you:

Carnivalesque LXVII:
When the Ancient/Medieval and the Modern Collide,
and How to Survive the Aftermath.
Starring Indiana Jones, and His Holiness the Dalai Lama!
And some stuff that didn't fit in, but that I just had to include:
And that's it! Make sure to check in at the Carnivalesque page to see who'll be hosting the next festivities, and don't forget to stop by here again on Monday the 2nd for the first meeting of our online roundtable on Judith Bennett's History Matters!
Posted by Notorious Ph.D. at 9:12 PM

Labels: medievalism, outside the ivory tower, worlds in collision

Hey--thanks so much for the link! I'll save you a bottle of my artisinal ale...