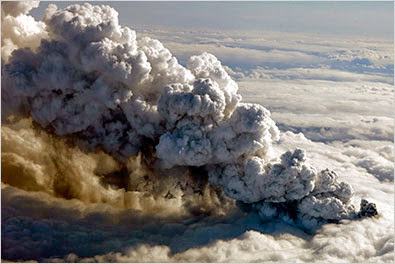 photo credit: Arni Saeberg/Bloomberg News (via NY Times)
Eyjafjallajokull!! Isn't that a fun name to say? Or at least try to say?

Airports all over Europe, east and west, are a mess, fully or partially shut down for days now, with no news as to when they'll be open again. Voice of Reason was headed from one research city to another, when they told her on the plane that they'd all have to get off because, as it turned out, they wouldn't be taking off. Happy Genius (a friend from my year in Fellowship City), who was supposed to fly down to visit me next weekend, may or may not be able to make it. Both have had romantic rendezvous fall through at the last minute, as did Medieval Woman, whose Dutchman husband is stranded in Dutchmanlandia -- ironically, only weeks after finding out that the long-distance portion of their relationship was finally over.

That's right: volcanoes are the enemy of romance. You heard it here first.

Now, I'm not scheduled to leave Exotic Research City for 10 days, and I hope that'll give it all time to blow over (literally) and for the backlog of passengers to get taken care of. I'm fortunate in that I have a place to stay if I get stuck. These poor vacationers find themselves scrambling for someplace to lay their heads, for days on end now, and with no word as to how or when they'll be able to get home. And Exotic Research City is not in Iceland itself, so I'm fortunate, relatively speaking.

But here's the thing: I've already lived through one volcanic eruption, as a child. Shouldn't that have bought me a lifetime pass?
Posted by Notorious Ph.D. at 9:52 AM

For a helpful discussion of the current volcano's name, and how Icelanders pronounce it:

If you want some more links, I put this post on the volcano up yesterday. I find all this fascinating, even though I am luckily at home and not stuck somewhere (I do have stuck colleagues and friends though).

I love it - volcanoes are the enemy of romance - awesome! TD was a bit pissy on the phone the other day and said, "damn Iceland, first they go bankrupt and NOW THEY SPEW ASH INTO THE ATMOSPHERE!" - but when I Skyped with him today, he was sitting on the couch with a Grolsch watching the apocalypse and looking very mellow.

I'm glad you're not needing to leave for another 10 days - I bet you'll be totally fine - my prediction is that they start flying by Tuesday, especially intercontinental flights. And if you're already booked, you're set! Hope your friend can come visit as well!

Thanks, all. Rootlesscosmo, let's hope it doesn't come to that...

The cosmos has decided to spare you a bit, in that you're not crashing at some distant and hostile airport. That's the extent of cosmic passes....

Well, the flip side of the volcano is that I was visiting my old home town this weekend. One of my friends had expected to fly to Amsterdam Friday night; instead, I got to see her!

I believe I heard that volcanoes are the enemy of romance first in The Odyssey, when Homer tells of how Vulcan trapped his wife Venus and her lover Mars in flagrante.

Anon, I don't know if I ever knew that, but that is about the most awesome bit of confirmation for my theory that I could imagine. ;-)

Wait, I wanna hear the story of the childhood volcano eruption....