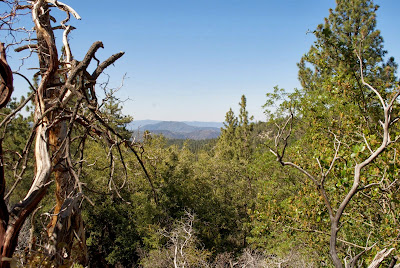 This past weekend, as I noted in the previous post, I had the privilege of seeing my dear friend Voice of Reason get married to a very fortunate man. For various sound reasons, they held the wedding at a mountain town that caters to weekend travellers seeking to escape city life and wander around among the trees, look up and see stars, and all that sort of thing.

After a few hours of fantasizing about ways to live in such a place while continuing to work in Grit City, I discarded the idea as utter nonesense,** possibly brought on by altitude-related oxygen deprivation, and instead thought about one that I might actually put into practice: once-a-semester writing retreats.

Now, in my fantasy world, this would involve enough time to give me two travel days, plus three days where I'd write in the morning, hike in the afternoons, and read in the evenings. The cost would be about equivalent to an academic conference. The retreat location of my fantasy world would have at least one window that would look out on no neighbors, and the actual dwelling would not have free internet access. The practical part of my brain does not allow me to delude myself that I could knock off an entire article or anything, but I do think I could accomplish a lot if unplugged, and in an inspiring place. And being forced to disconnect from the e-chatter for a while might help form some good habits I could take back home.

I am, as you may have guessed by now, a bit of a romantic.*** And I do acknolwedge that if a procrastinator gets in a car or on a plane and heads to the mountains, the person who gets out of that car or plane in the mountains will be… a procrastinator. So there is essential groundwork that I need to think about before seriously contemplating this.

I know that one of my regular readers takes herself on retreats, but these are spiritual, rather than work-related. Then again, my longing for occasional doses of mountain solitude does have a vaguely spiritual component to it, too.

Anyone tried this? Did you find it helpful?


**First, it clashes with my live-where-you-work philosophy and the communitarian and environmental benefits of said philosophy. Second, I've been nattering on for a month now about becoming more emotionally connected to Urban University and Grit City. Putting down my main roots somewhere else entirely would be antithetical to this goal, to say the least. Third, it would be damn expensive.

***I don't think that's necessarily a bad quality. But it's one that has prompted me to leap into untenable situations in the past.
Posted by Notorious Ph.D. at 8:23 PM

I haven't, but it does sound lovely. There's definitely something to be said for a complete change of scene and routine now and again.

Oh yes, that's one of my work fantasies as well. I'm not sure that I'd be any more productive, but I'd sure like to try!

I haven't tried this, but it's also something I aspire to. I've even seen the cottage in Scotland that I'd want to buy to do my writing retreats in. Anywhere with hills and sky would do though; it's space to think unconstrained that I crave. (Why I should feel that buildings constrain an entirely cerebral activity, however, is probably a matter for the psychologist I've so often been told I need.)

I think if I went away for a weekend, I'd find it harder to write because I'd want to spend all my time out and exploring. I suppose if I went to the same location for this purpose, by the third visit I might actually be able to concentrate. In all, it sounds like a great idea if you could stick to the write/hike/read plan, and not be lured outdoors the whole time!

I've thought about this, too. I sort of made it work when I went on spring break with a non-academic friend who is an owl: I got up early and wrote, then we did stuff together in the afternoon. She didn't quite get why I wanted to write "on vacation," though. Alone would be better. The ideal place to write (though very un-green) would be a cruise: there's really nothing to do (from my point of view) except read, write, and stare at unchanging sea. Meals are laid on; the gym is open fairly long hours; you can pick your schedule. I'm also very productive on airplanes and in airports. The key is having nothing else appealing to do. In the mountains, weather would be important: you want it not to be too hot or thundery to hike in the afternoon.

I've never done this myself, but about two or three times a year I threaten to move out and check into a cheap motel so I can get some writing done free of domestic duties and responsibilities to anyone but myself. (But I don't follow through. One of these days. . . ) A friend of mine who works in Salt Lake City and lives by herself regularly drives up to Park City (about a 30 minute drive) to rent a suite and get some work done, and it seems to work for her.

Try it out. Then you'll be able to judge whether a retreat is the way to go. Chances are it won't suck, but you won't know how much work or relaxation it's worth until you try it out.

I'm fascinated how many people have thought about this. I have too: and there is an organization that has some cottages on Cape Cod that are awarded by lottery. I've thought about that.
My hunch is that the key is being free of normal distractions. for me that would mean no internet access. I fantasize a beach cottage, so I can go for nice walks on the beach, and then go to work...

Thanks for the comments, everyone. The flip side of Susan's comment about being surprised at how many have thought about it is my own surprise that no one seems to have actually done it.

I should also point out that it's a luxury that really only the childless can rationalize indulging.

I'm convinced: I should totally give this a try.

Totally, like, cool. Try and let us know if it works!

As an undergrad, I can say that there is often intimidation when talking to profs. Regardless of how approachable the prof is. So, it may not be at all that they don't realize you need a PhD to be a prof....they may just be nervous and awkward undergrads intimidated by authority and intellectual status and hence say rather stupid things without thinking, even though they know better. But, in those cases I would try to make light of it ie. (With a smirk)"Yes I do, but the rest of my sanity was taken by my PhD."

Then again...some people are just oblivious and just because one got into university doesn't mean one is smart...:s

I know a group of academic friends who do this sort of thing together -- they rent a house/cabin and go there for a week/weekend, during which time they work, share ideas, read each others drafts, cook, drink, and have a blast. I've always envied this idea. I guess the socializing could get in the way of the work but it could also be incredibly productive, if everyone agreed to stick to the program.

BTW, do you read the blogger "Writing as Jo(e)"? She often goes for mini-sabbatical weekends to a monastery and it sounds absolutely lovely. I've been reading her blog for a while and every time she goes on one of these jaunts, I think: one of these days I'm going to do that too!

Of course, I still haven't.

I have done this, twice, and it was everything you imagine it would be: relaxing; productive; restorative; fun. I live and teach in the Midwest, and the landscape was pretty modest, but so was the drive time and the price of renting a cabin in the state park for three nights. No internet helped, and so did a willingness to eat beans out of a can and drink coffee made in a stove-top percolator. Try it.

Ooh, Ooh!
I'm going on a disser-cation in 3 weeks! Nigel, who will be writing his MFA thesis, and I have a cabin in the hills for 4 weeks solid.
The plan is 2 hours of morning work, walk to the lake, more work, lunch, more work, retire to the deck with a beer and the baseball game on the radio.
I'll let you know how much work gets done...

My extended family has a place on the river about an hour outside of town.

This is a mad, mad privilege.

I've used it for writing/work weekends, as has my dad and his partner when they were working on their second MAs, and my partner is planning on taking a week this summer to head up there with articles pre-loaded on the laptop to just read and write.

There's no internet, no tv reception, and often no neighbors. There is a hot tub which I think adds to the appeal and makes it easier to work. Cool beer + hot water = nice relaxed writing.

It is seriously magical.