I haven't been posting much lately, because most of what I've been doing has been transcribing municipal ordinances, and they don't give much to talk about. But every once in a while, something entertaining comes up. This time, the entertainment was provided by my own rather unpredictable brain that cheerfully translates unfamiliar words into the first thing it lights upon. To wit (and leaving out the boring parts about the mechanics of translation/transcription in an age before orthographic rules -- and, more importantly, before I'd finished my first cup of coffee): I was fully convinced for 90 minutes that tuna were among the animals that residents of Exotic Research City were forbidden from herding through the city streets.

I make my own fun. 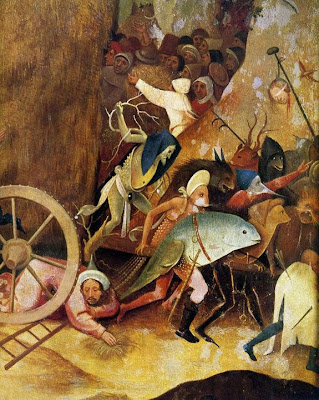 Oh, but please don't! You have geeks here who want to know, and promise not to be bored.

Personally, I think the city's much better off without that herd of tuna wandering through the streets. Now if they'd just do something about those darned jellyfish!

I agree with Belle. I don't want Tuna taking over MY streets!

I would love to know just exactly what Mr Bosch was on when he painted that one. But on the other hand, if the incidences of tuna-herding were so common as to require regulation, perhaps his obsession with fish isn't actually all that bizarre.