The Fox and the Hedgehog, part 1: A Hedgehog Contemplates Change

"The fox knows many tricks; the hedgehog knows only one, but he does it well." 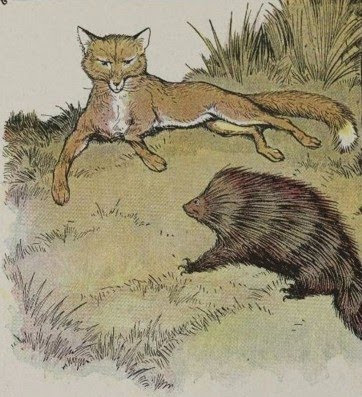 I can't remember the first time I was introduced to the fox and the hedgehog as metaphors for scholarship; likely it was some time early in graduate school, in some conversation on a list-serv (yes, I'm just that old). The idea was that there were scholars who spent their careers becoming experts on a single topic, and those who moved from one topic to the next. The foxes knew a little about a lot, while the hedgehogs knew a lot about a little.

I always idealized the hedgehog in this story. I wanted my knowledge to be deep. Maybe I was insecure with anything less.

But I've been thinking about this a lot over the past few months, sparked first by my own consideration of my research agenda, then by conversations with fellow scholars in Exotic Research Country, and most recently by a tangent on a discussion over at Historiann's on the topic of whether anyone would care if people stopped writing women's history. Anyone who has been reading this blog for any length of time will not be surprised that one of my thematic areas of study is women and gender. My first book was on women and gender, combined with another thematic area (say, for the sake of argument, urban history) and a specific geographic area that I'm interested in. I think it's a good book, though not without its flaws. I also think that I've said what I want to say on the subject -- for now.

And as I started thinking of what I'd do next, my mind turned first to ways I could build on the knowledge I'd acquired in researching and writing the first book. I had an impressive body of knowledge built up on women's history and gender studies, not to mention a good sense of where the sources were and weren't. I also knew the literature on area #2, urban history, both in my own region of study and in the broader region. How could I go from there?

Yet no idea that came to the surface caught my interest. I saw a couple of projects that were certainly doable -- but did I want to be the one to do them? Try as I might, I just couldn't get excited.

And then, in the corner of my eye, something sparkly and shiny: two project ideas! One was the one I've referred to as Shiny New Project, something that would take somewhere in the 5 to 10-year range to complete, and that might incorporate both my thematic interests, but without them being central. And there was a second one, a bit less sparkly, a lot less well-defined, but with a phrase, a concept, something that glittered for a moment when the sun caught it just right, suggesting possibilities, even though the path was unclear. And this second one had nothing to do with gender or urban history.

I was, in short, contemplating the leap from hedgehog to fox.

And then, all hell broke loose.

Being a fox is fucken fun.

In the sciences, everyone has to start as a hedgehog: both as a graduate student and a post-doc. But once you are running your own independent research program, you have the choice of being anywhere on the fox-hedgehog continuum you want. I run my lab like a fox, by filling it with trainees who are hedgehogs. So as whole, my research program is both broad and deep.

What do you think it would be like if senior humanities scholars could lead teams of more junior scholars, kind of like science research teams headed by a PI?

Definitely a fox. I had this running battle with self, trying to force myself into hedgehogdom; thought anything less than that was cheating. Then, finally, I had that blinding bit of self-knowledge and accepted that in life and in scholarship, I'm a fox. Totally agree with Comrade PP: it's fricken fun!

I get my hedgehog impulses from being hedgehoggish in the care I take as I flit from one topic to the next, and it shows up in my citations and biblio!

Notorious, I agree with CPP that this is something of a life- and career-stage question. It's hard to be anything BUT a hedgehog until one has launched a new project after the dissertation monograph. How could you or we know which species you actually are until you write a second book (or at least publish a few articles out of the new project)?

I like to think of myself as a changeling--capable of being Mrs. Tiggy Winkle and then changing into Mr. Tod when I need to stretch my legs and raid a henhouse or two. Absent a lab full of hedgehogs (or flying monkeys?) to do my bidding, I think it's good to have both sets of skills.

This is great - my advisor always used a different metaphor: a giraffe or a mole. Giraffes can always see the big picture, but have trouble with the details. Opposite for the moles. I'm a total mole.

informative for me and also for other thanks Change Parts