A Stew to Welcome In the Fall

Fall is here. It is my very favorite time of year. And I like to welcome it in every year with a batch of Kabocha squash soup.* It's delicious, full of all sorts of good vitamins, and freezes well.** As an added bonus, it gives you an opportunity to use one (or perhaps more than one, depending on your familiarity with fennel and/or kale) of those vegetables that are always in the grocery store, but that you've never known what to do with.

You start with a kabocha squash. It looks like this: 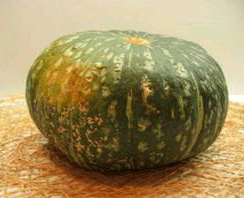 It's somewhere between pumpkin and butternut on the squash flavor scale, so if you can't get kabocha, you can use one of those. Pick one that's about 3 ½ pounds, and gut and trim it. In fact, this is the hardest part of the recipe, because a kabocha has a rind about as thick as a pumpkin, but the shape and size make it difficult to cut open. Seriously, the first time I tried to cut into one of these, there was a point where I was there with two knives, a hammer, and a screwdriver, wondering if I knew anyone with a table saw. Eventually, I hit upon the method stabbing down from the top several times until I had succeeded in removing a small jack o' lantern-style "lid," then cutting wedges down from the edges of the opening. After that, you trim off the rind and cube the flesh. You should end up with about 6 cups of cubed squash, give or take a cup.

There. The hard part is over. Now you're going to be needing three large cooking pots or something. One of them needs to be a really big stockpot. And you'll need them all at the same time. Got 'em? Good. Here we go.

First pan: this is your giant stockpot. You're gonna heat 1 tablespoon of olive oil, then two bulbs of fennel (trimmed, washed, quartered, then sliced), two medium onions (same thing), and the squash. Add them mostly all at once, but in small enough batches so you can coat them with the oil. Put the lid on, and cook over medium, stirring frequently, until things are softened and start to amalgamate. This should take about 20 minutes. Now, while you're waiting, start the…

Second pan: this is a good-sized cooking pot. In it, you're going to boil two chopped, peeled (or well-scrubbed), diced potatoes in two cups of vegetable stock and one cup of cooking wine. Once you've got it at a low boil, keep it going for about 10 minutes. Once you've got it started, start the…

Third pan: a skillet or a wok. Heat a tablespoon of olive oil, add one to two chopped garlic cloves, and a pound (yes, a full pound) of sliced or chopped crimini mushrooms, then add about a teaspoon of dried thyme, and ¼ tsp. (or less, adjusted to balance out the level of sweetness in the particular squash you buy) of cayenne pepper. You're going to cook this down stirring frequently, until the mushrooms give up their juice, then keep cooking until that juice is gone. This will really concentrate the flavors.

This is what it looks like once you've got it all going: 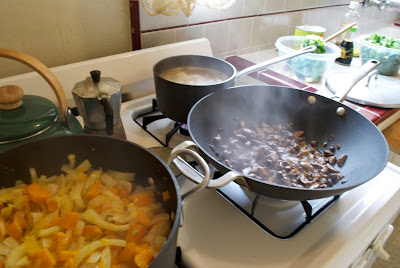 Now, this should all finish up around the same time – about half an hour after you started chopping the fennel and onions (and god only knows how long after beginning your battle with the wily kabocha). Hopefully that first pot has cooked down so you've got a bit of room. Stir in one large can of diced tomatoes (drained).*** Then the mushrooms, and the potatoes in their stock (though you can hold back bit of this stock to use to deglaze the mushroom pan so you don't lose any of that yummy concentrated flavor). Toss in a bit of salt & pepper, but not too much, because next you're gonna add this stuff: 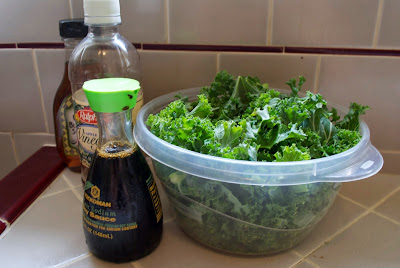 That's a teaspoon of soy sauce, a tablespoon or so of honey (though I use agave nectar, and I suppose brown sugar would do in a pinch), and 3 tablespoons of apple cider vinegar. Stir it in, then carefully add one bunch of kale (rinsed, de-veined, and torn into manageable pieces) – I say "carefully" because, in my experience, by now the pot is so full that I end up having to sprinkle a layer on top, then gently push it down into the stew with the back of the cooking spoon, then keep doing this until it's all in.**** Cover the pot tightly and simmer for 30 minutes, stirring only often enough to prevent sticking.

What you get is about eight 1 1/2-cup servings of this: 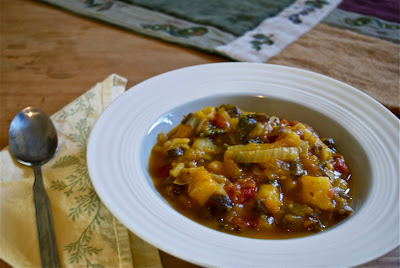 
*Recipe is adapted ever so slightly from the New Vegetarian Epicure's "Winter Vegetable Stew." Versatility note: a scoop of the less liquid portion of this stew also makes a great burrito or enchilada filling (no cheese required -- the squash is rich enough), especially if mixed with a bit of black beans and brown rice.

**You may also notice that, if you go with agave or brown sugar rather than honey, the recipe is totally vegan – in case that matters to you.

***Yes, I said "canned." I find that by the time it's right to make this soup, fresh tomatoes are at least a month out of season. And better a canned tomato than a fresh one that tastes like nothing at all.

****The better method – the one the cookbook actually recommends – is to toss another teaspoon of olive oil into the pan the mushrooms were in, along with a clove of garlic, then quickly sautée the kale until it just wilts, but it still very! bright! green!, then add it dead last, after the final simmer. This is nice, because it keeps the kale's bright, vivid color. But by this time, you will have already been in the kitchen for over an hour since starting to cut the fennel and onions, and maybe 90 minutes since beginning with the kabocha, so maybe you don't want to add another step. Still, it's an option, and the result is, I think, worth it.

I'm going to the local farmer's market in the am, and now I know what to buy. Thank you! (And last week was the end of tomatoes and peaches in this neck of the woods, but squashes abounded!)

Yum. Last week I braised a winter squash in wine and garlic, but this sounds awesome!

it sounds delish! I'm so going to make this. I love fall squash soups so this must be a great new one for me! And a good way to use that kale ;)

Lise, as soon as you move back to Grit City, I'll make you as much soup as you like!