How Dragons Changed My Life

Another Damned Medievalist has a post up about the recent death of fantasy author Anne McCaffrey. I'm glad she did, and she says it beautifully. I'm just reprinting here (with a couple of small edits) my own comment that I left over at her place, because reading ADM's post made me realize how much of an effect McCaffrey's books had on me: 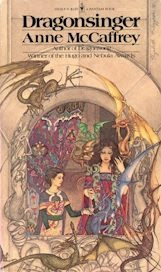 I read the McCaffrey's Harper Hall series when I was… oh, eleven or twelve? And I was completely taken with the young female heroine. I hadn’t thought of the “damaged outsider” angle [NB: see ADM's post for an explanation of this], but it makes complete sense.

Sure, her books are a far cry from being "great literature." But they didn't have to be. If we exclude the work of Butler and LeGuin (a bit too heady for most twelve year-olds), there wasn’t a lot of that genre at that time that featured female protagonists — and especially not female protagonists who were valued for their skills rather than their beauty. For the young adult series, you can throw in the fact that the female protagonist was a young adolescent, and you've got some pretty powerful stuff for a girl my age. When I read these books, I felt like McCaffrey was writing for me, and (though I couldn’t have articulated it this way at the time) that there might be a place in the world for an awkward and kind of homely smart girl who never new what to say, how to dress, or how to fit in.

When I tell my students how I became interested in medieval history, I tend to point to the historical fiction on the Tudors and their ilk that I purloined from my mom’s library piles. But the more I think of it, the more I believe that it began with Menolly and all those bitty fire-lizards.

Much agreement. One of the joys of getting involved in my current pop culture and history gig is that I no longer have to feel ashamed about being as up on SF&F as I am on post-structuralist theory!

Those books were incredibly important to me in my adolescence -- and at the time I didn't know of anyone else who read them! I should have been on the lookout for future medievalists!