Is it love, or only lust? A photo-essay of 48 hours in Venice

Last weekend, I got to go to spend 48 hours in Venice. My friend Osito, another medievalist of Blargistan who I met in Blerg City back when we were wee slips of grad students, has turned to a second project that has him stationed in La Serenissima for three months. He immediately fell head over heels for the place. He professes that Blerg City is still his true love, but I have my doubts as to how true that is. And there's reason: Venice is, in fact, a stunningly wonderful place, especially early in the morning and late at night, in the 12 hours of the day when there are (relatively) few tourists. [1]

I came into Venice the way everyone does: my train from the mainland, then by vaporetto (a sort of bus line, but with boats) along the Grand Canal: 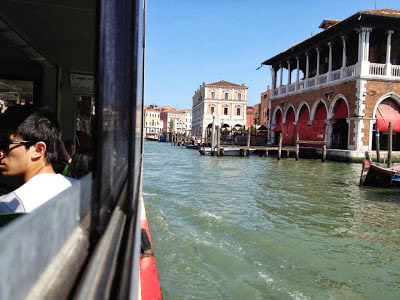 I'm on a boat!
Upon disembarking at an out-of-the-way stop halfway between the Rialto and Academia bridges, I was met by Osito, who ushered me into the cozy, bright apartment I'd be sharing with him for the next couple of days. the building also housed one of the pavilions of the biennale, a global art fest that Venice hosts every summer, so every once in a while over the past week he had gotten a knock on his door from someone looking for Estonian conceptual art. He was fresh out.

Speaking of odd art: the apartment was right around the corner from an art gallery/studio space where the artist, Gigi Bon, took her inspiration from the early modern cabinet of curiosity. The gallery was indeed stuffed with curious objects (she seems to be very into rhinoceros just now), but my favorite thing to look at was her worktable, which itself is a work of art: 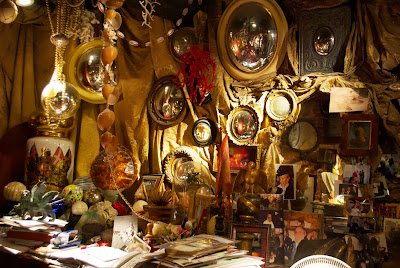 Then there was dinner with Osito and a mutual friend (and director of last summer's Big Seminar Thingy), followed by a leisurely stroll around Venice by night, which is gorgeous beyond words: 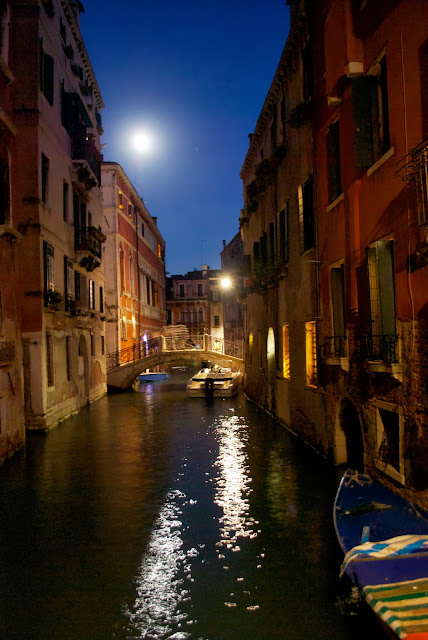 Of course, it wasn't all leisurely strolls. One does not leave Venice, even the shortest visit to Venice, without seeing St. Mark's, [2] and with good reason: 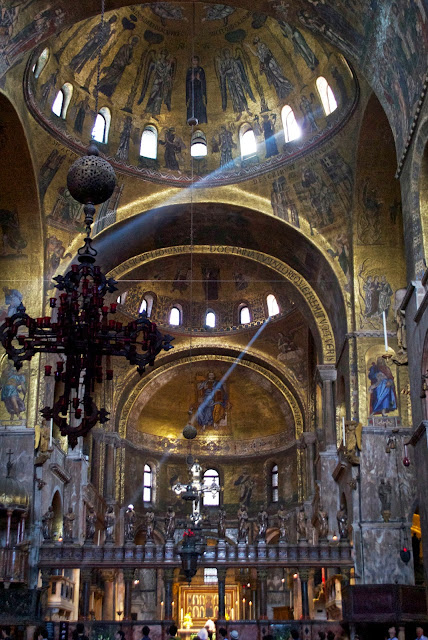 (Yes, those are real, unretouched shafts of sunlight.)

But there were also more subtle sights to be seen... 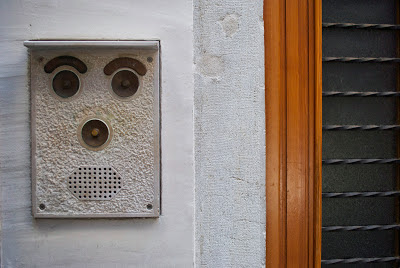 You'd think that a door buzzer would get over being surprised to see guests.

...as well as people, such as these fine fellows: 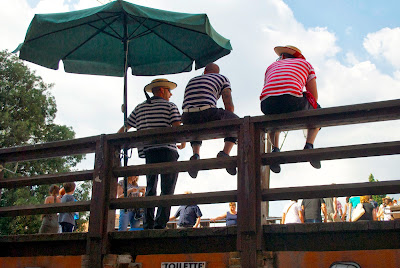 ...and these young ladies, who were either part of a fashion shoot, or another piece of conceptual art: 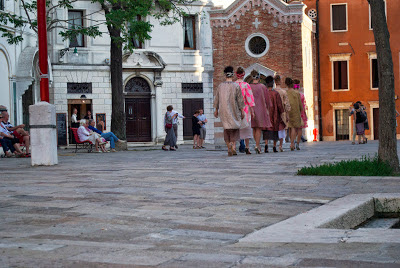 Of course, Venice has its issues, the main one of which is that it is rapidly becoming Italyland for tourists. Almost no Italian (other than real estate speculators) can afford to buy an apartment there, and the population of real live, honest-to-god Venetians is apparently dropping by about 1,000 a year as owner-occupied apartments are converted into tourist apartments for short-term stays. I can only imagine how it feels to be a Venetian, living in what must seem more and more like a theme park every year.

All that is true. But also true is this: Venice is beautiful. Everywhere you turn, a deep beauty that no other place I've seen can really match, and that no tourist veneer can ever completely efface. 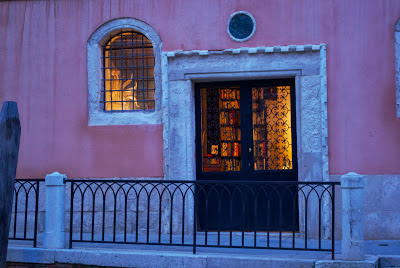 [1] And yes, I recognize that I was, in point of fact, a tourist. Isn't it interesting how even tourists complain about tourists? We so don't want to be one of "those people." Digression: I was browsing through a market (cheap clothes) in the south several weeks ago, when me and the Divine Doctor J. heard a woman near-bellow at a merchant, "NO. HOW MUCH IS IT IN AMERICAN?" This really happened.

[2] You are not supposed to take pictures in St. Mark's. There are signs posted all over to that effect. But look at those morning sunbeams and tell me if you could have resisted. I tucked my big ol' Nikon back in my bag afterwards, though: I figured that I should at least pretend not to be taking pictures, since the many guards were doing me the favor of pretending that they didn't see me doing it.
Posted by Notorious Ph.D. at 12:26 PM

Venice totally surprised me, and swept me off my feet. I only had a day, and I knew I'd have to come back. The feeling that you nevervknewcwhat you'd find when you walked around the corner.. A couple of guys playing glasses, or walk into a church devoted to Vivaldi, or... And the light in Canaletto paintings suddenly made sense.

I also stopped at a gelato place where I got tiramisu gelato, and I thought I'd died and gone to heaven.

That curiosity cabinet worktable is fucken awesome! BTW, is it true that the canals smell stinky?

Well, I could have resisted only because I would not expect any picture I took to come out well. That one of St Mark's is stunning. Thank you for this post!

Funny---I was going to comment and say, "Hey! You can't take photos in San Marco!" Heh. I don't even care about whether it makes me touristy or easily romanced by the ostentatious trappings of Venice: I adore it.

I have always wanted to go to Venice. Maybe this year I'll do it!