"On the weekend in summer, when it gets hot, Bologna empties out. The bolognese go to the beach or the mountains, and the only ones left in the city are the tourists." 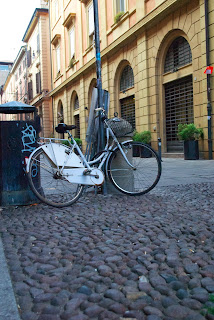 is what one of the instructors here at my school told us a few days ago. Likely the same is true for many Mediterranean cities. But as Bologna is not the huge tourist destination that Rome or Venice or Florence is, it's really notable here. Which is how I come to be passing half an hour leaning against a column under one of he city's famous porticoes in a shady spot blessed by a light breeze, an old bicycle to my left and the "seven churches" of Santo Stefano to my right, working my way through a sour-cherry granita in relative quiet. It's a lovely city. 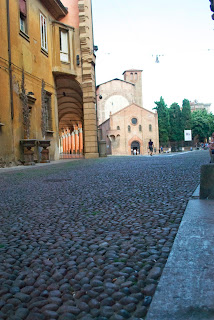 I've spent a hot and humid weekend ducking inside of air-conditioned local attractions, and that means it's been a museum weekend. Unlike the museums of a place like Rome or Barcelona or Paris, the museums here were uncrowded: at one or two points, a tour group comes through, but they quickly pass me, and I'm left alone again. But that's not the only difference: here, the museum objects and art are just kind of... there. Usually, one or more of the things that I associate with the "museum" experience -- glass, humidity control, carefully researched provenance cards, finely tuned lighting, hovering security personnel -- are absent. Sometimes, it's because the repository is attached to a small church, so the hosts (in this case, an order of monks), while they do their best to preserve and display the art, don't have a lot of money for maintenance, and aren't precisely trained curators: 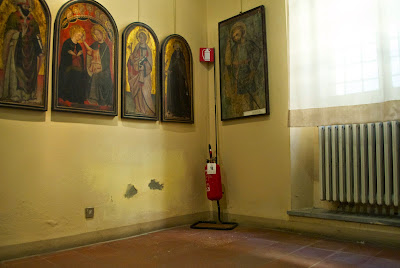 At least they're set if a fire breaks out.

But even in more mainstream museums, there is a certain casualness when it comes to having someone keep an eye in the visitors. Sometimes someone would poke their head into a room where I was to make sure I wasn't injuring the art, but most of the time I was on my own. 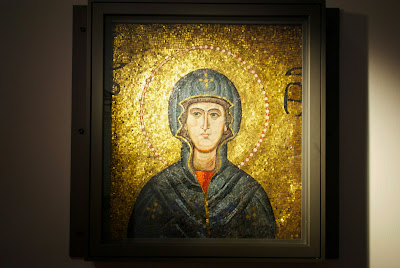 I could have licked this.

Now, I found this all quite strange, and a little shocking. Is there just so much art in Italy that they just pile it up in corners [1] and let us poke around? Is it just because this particular city is off the beaten tourist path, so no one's given it much thought? Is the will there, but not the money? [2]

But then part of me got past the horror of what the benign neglect (not to mention, in some cases, the humidity) was doing to the pieces I was looking at, and began to feel like a bit of a time-traveler. Was this the Italy encountered by American tourists in the 60s? Was there really a time before metal detectors, proximity alarms, and everything under glass? Before everything was carefully labeled to tell you how important it was? Before there was a trained docent standing by to answer your every question?

All that aside: the medieval museum had a lovely opening section telling about the history of the museum itself, and eve preserving some of its items from its origins as a cabinet of curiosities (including some carved ostrich eggs and a four foot-long "unicorn horn"), and the lack of tags in some places left me to make up my own stories. The church of Santo Stefano was an architectural marvel with some lovely little pockets of picturesque decay that made me wish for a better selection of lenses (and that prompted me to drop another euro in the donation box on my way out). The museum of the history of the city was a thoroughly updated and smartly designed didactic museum that I spent four hours in. And lurking in the basement crypt of a deconsecrated church now housing an astounding collection of antique spinnets and claviers, of all things, was this fourteenth-century fresco that workmen just turned up a few years ago: 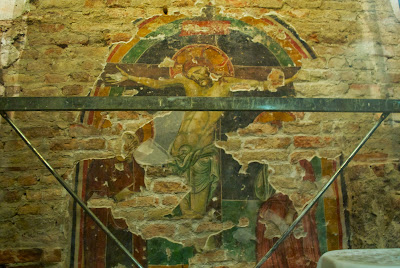 Next weekend, I dive in to Venice (not literally dive in; I'm not suicidal) to spend a purely tourist weekend, hosted by my dear friend Osito. I've never been, and I know it's going to be a blast. But I'm glad to have spent this weekend as one of a relative handful of lonely tourists in a near-empty city.


[1] No exaggeration: in one place I ducked into a 20-foot-square "room" to find a three-foot-tall silver-plated monstrance, probably from the fourteenth or fifteenth century, tucked into an unlit glass cabinet. No tag, no lighting: just kind of crammed into an out-of-the-way space.

[2] Here I should also note that most places were busily trying to raise money, one donated euro at a time, to repair structural damage caused by the recent earthquake in Emilia-Romagna, so they may have more pressing concerns.
Posted by Notorious Ph.D. at 1:20 PM

Do you have any plans to visit Ravenna while you're there? It's pretty accessible from Bologna, and they have wonderful mosaics there. Not a big tourist destination, and near the water–very charming.

PS Say hi to Umberto Eco for all of us.

Sometimes what you experienced, the horror of the treatment the pieces seem to receive aside, is a nearly spiritual experience in which you step out of the shoes of a tourist and at least temporarily into those of perhaps someone looking at the same work long, long ago through different eyes.

Personally, I love to be in a city that everyone has deserted. It's like finding your own personal treasure. The heartbreak keeps it real.