For those of you who haven't heard about Wisconsin Governor Scott Walker's plans to bust the public employee unions (including all UW system faculty,

as well as schoolteachers, public hospital nurses, and... well, any state or local government employee represented by a union), you can check it out here. (There is also a piece at the Chronicle, but I'm not linking to it because so many of the comments, as usual, are ignorant and hateful. But it's there, if you want to read it.)

For one opinion of why Wisconsin finds itself in this situation rather than with the large surplus it was slated to end the 2009-2011 biennial with, you might look here.

And finally: one of the many videos** floating around the web of the Tuesday protest.*** I just like this one 'cause of the Billy Bragg:

UPDATE: UW-Madison undergraduate student council endorses a walkout at noon today (Thursday). Choice quote: “If your philosophy of student council does not include protecting this university and our students, then I question why you are here.”

_____________________________________________
**The shouts you hear are not "U.S.A." (which is what I thought at first) but "Kill the Bill." And the Madison firefighters get such a huge cheer because theirs is one of the three public unions actually exempted from the bill, so showing up for the protest meant breaking with their state chapter (which supported Walker in the November election) in order to stand with the other state workers. Solidarity FTW. 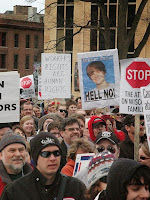 a placard with a teen-mag photo of the weirdly ubiquitous Justin Bieber, emblazoned with the words "Bieber says: Hell no!" UPDATE: FOUND IT:

****Note how the thousands of protesters are mostly keeping to the sidewalks and staying off the capitol's lawns? Because even when they're righteously pissed off, Midwesterners are still considerate. I kind of want to hug them all.

Thanks for the links and for this:

Because even when they're righteously pissed off, Midwesterners are still considerate.

As a Midwesterner in exile, I love the truth of this.

Hi,
Thanks so much for the e-press. However, UW system faculty are not all represented by unions. Two or three campuses are but there's 20+ campuses!
As faculty who have traditionally been paid lower than national averages, we are fighting for our right to survive. It is THAT bad. I'm union (although my campus is not unionized), but I'm kind of bummed that 'union' has hijacked this story. A broader view of the human effects of this bill would help us all so much more.

We only recently (two years ago, perhaps?) gained the right to unionize effectively (university faculty, before, we could join a union, but it couldn't represent us in a meaningful way), and only a couple campuses have moved forward (it's a massive effort to form and vote in a union, amazing!). The union issue is big, because it bodes poorly in lots of ways. But other issues are also important.

Thanks for the support.

yes, thanks for posting this. As a native Wisconsinite, I also laughed at this: "Because even when they're righteously pissed off, Midwesterners are still considerate."

I hadn't realized that unionization was not a system-wide thing. Interesting, and there's definitely a story there.

Good to see these links. I'm another Midwesterner in exile, and we're not getting much coverage in the traditional media where I am on the east coast.

I'd be interested in hearing more about the union issue in the UW system, whether from Kate or Notorious or Bardiac or anyone else. Is university administration on board with this legislation?

Eileen, my guess would be that they *wouldn't* be -- what's being talked about here is between the unions (and let's not forget that the UW faculty & TA unions are far from the only ones involved here!) and the state. UW stands to face recruitment problems for grad students, and retention problems for talented junior faculty if this goes through.

They will have enough bodies, for sure. But the ones with any choice will now be more likely to go elsewhere -- a nifty town and beautiful scenery can only go so far as an incentive, and if you throw in there the knowledge that most of your public services (schools, hospitals, etc.) will be staffed by underpaid workers... well, that's another disincentive to settle, isn't it?

This is terrific, Notorious. I was so happy to hear about the enormous (but considerate!) crowds massing in Madison yesterday. Thanks for summing it all up with linky goodness.

Update: as of noon Wisconsin time (when the vote was scheduled for), the state leg. apparently doesn't have a quorum. Which is a tactic I hadn't thought of.

Here's some information about the 2009 legislation that finally allowed Univ of Wisconsin system academic workers to be represented by unions: http://www.aftface.org/index.php?option=content&task=view&id=546

(Please note that AFT is the union that's been working to represent UW system folks for some time.)

Here's a FAQ from the UW system about the unionization process:
http://www.wisconsin.edu/hr/FAQ%20revised%208-25-10.pdf

The administration at my school has, so far, been fairly neutral in public talk about union stuff. They've said they don't see unionization as adversarial to the mission of the university.

As another exiled Midwesterner, I'm proud of the people of Wisconsin for taking such a courageous role in their democracy. I agree with what Kate G. has said above: this goes much deeper than a debate about unionization, this is about people being respected (and paid) for the the services they provide to their community.

If they committed fraud against the taxpayers by calling in sick and then going out, they should be fired.

They (the Senators?) didn't call in sick. They just left.

And I don't think that's really the most important issue here.

Depriving the ledge of a quoroum is something that happens all the time in American political history. If I recall correctly, it's what some Dems did back in the early 2000s when states were redistricting according to the results of the 2000 census.

Yeah, I wish everyone who fraudlulently called in sick and took a personal day instead were fired too. I also wish that people who wrote comments on blogs when they're supposed to be working would be fired too. Funny how fungible time is when it's our own!

Nevermind, H'ann: "Lisa" turns out to be a spam link. But I'll leave it up for continuity's sake.