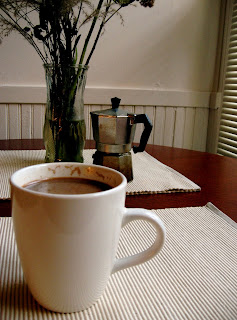 I was sitting at home this morning writing, and I looked down at my cup and thought, "My latte is almost gone." And then I realized that when you run out of the latte you made, you can't just top it off; you have to make a whole new one. This is a time-consuming break in whatever work you're doing. Furthermore, it would require one to admit that one was the kind of person who would make and drink Two Whole Lattes in a single hour. Which, of course, I am. I'm not sure I even aspire not to be. But the act of actually making that second latte (as distinct from the entirely reasonable act of drinking it) seems to say: "I am so coffee-addicted that I will take steps to procure it that would never cross most people's minds."


In Blerg City, the lattes are smallish, usually 6-8 ounces: 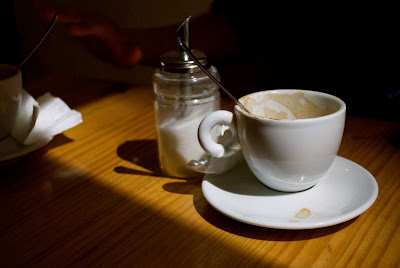 There are one or two places in which you can order a 10-ounce coffee beverage. But this is unusual. And the post-meal coffee of choice is barely three ounces: a shot of espresso cut with an equal amount of milk (or, if you're feeling like drinking your dessert, with a generous sploosh of sweetened condensed milk). Within a month, I've acclimated to the point where even a 12-ounce coffee from the first stateside airport seems gargantuan -- I once actually inquired, puzzled, whether they had given me a large by mistake. But within a week, I'm back, and 16 ounces seems like the normal size. 12 ounces, with a double shot, is me being abstemious. I could probably drink gallons of the stuff without realizing it if physics didn't require the space in coffee cups to be finite.

On the other hand, I still have enough shame not to order one of those now-ubiquitous 20-ounce lattes. It's not that I couldn't drink it. It's not that I wouldn't deeply enjoy drinking it (except that by the time I got to the bottom, it would probably be tepid). It's just that I feel that carrying around a 20-ounce cup of caffeine would be tantamount to publicly admitting that I had a serious problem. In the privacy of my own home, however, I fantasize about having a latte pot, in the same way I have a coffee pot -- something that enabled me to make about 40 ounces of soy latte at any given time, and leave it warm and happy on the burner so I could give myself a little warm-up at will. Or perhaps something more akin to a soda dispenser? On the other hand, that would bring my total coffee-making devices to four** -- five, if you count the burr grinder. And, of course, it would be dangerously enabling.

My name is Notorious, and I have no self-control. 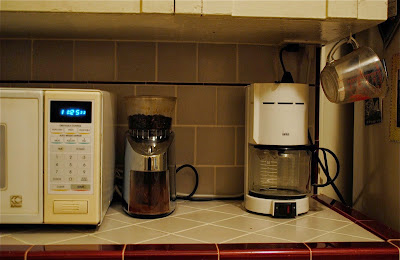 **The current three are: regular drip coffee maker (above), old-school Italian stove-top "espresso" maker (way above), and a french press that I never use because, while I recognize the inherent goodness of coffee from a french press, it just. doesn't. make. enough.
Posted by Notorious Ph.D. at 11:34 AM

Oooh! I could jump in and swim around in that!

OK: but why is drinking coffee bad? Do you personally suffer ill effects from it? If so, it makes sense to moderate your intake; but if not, why not drink more if you want it?

Oh, and you need a frother. See http://www.amazon.com/Aerolatte-Go-Milk-Frother-Black/dp/B0001RT2C4/ref=pd_sim_k1

caffeine is my legal drug of choice. I think I'd sooner give up hard liquor than my daily massive consumption of caffeine. I say get the biggest damn latte you can and drink it with pleasure and pride

Ah, I share your caffeine addiction and your love of lattes. My milk frother is one of my best friends :-)

Had never thought about a 40 oz latte pot...but now that's what I'll be dreaming of.

What CPP said. Fuck lattes; 51 ounces at a time of pure, uncut black coffee from a French press ought to serve you just fine.

Yeah, get rid of devices that don't make enough coffee at once! Make room for the big ones!
(your friendly neighborhood co-enabler)

French press every-time, for me. A large one, which makes 6 cups of tiny coffee, or three mugs.

Have gone from caffeine conundrum to caffeine tragedy--inspired by your post yesterday, I was all set to froth some milk to go with my coffee this morning, but the batteries on my frother had died :-(

You should drink extra caffeine and alcohol to make up for those of us (we few, we unhappy few) with fragile, over-sensitive nervous systems and other body parts, who love the idea but just can't process either comfortably. Think how much vicarious enjoyment you could provide!

Dammit Doc N., I live in a house with that much coffee-making apparatus and I hardly ever drink it, being British and tea-dependent. If you want to *own* that addiction you've got to step it up!

Seriously though, that much coffee would give me palpitations and a headache to kill with, but it would nearly be worth it. If you've got the tolerance, flaunt it, that's what I say.