How I Learned to Read (a tale from the archives)

I have arrived in Blarg City.  In fact, I arrived a couple of days ago.  I haven’t started working yet – that comes Monday – but that’s okay.  What I have been doing is staying at the home of a good friend here.

Friend and I met when I was a mere slip of a grad student, not even ABD yet.  I was here in Blarg City doing pre-dissertation scouting research.  We met when a group of grad students from here, also working in the archives, came over to my table one day and announced, “It’s coffee time. Join us.”  Of course I did.

Then, a few days later, he saved my life.

Okay, well not precisely my life.  But close enough, for a grad student.  And now I’m going to tell my version of the story that just about every medievalist (and many people doing archival work in other fields) has.  You see, about a week after we met, I ordered up my first document register.  Exciting!  And they plunked three volumes of records from the fourteenth century down in front of me: More exciting!  And then opened the first one, and realized that, despite my training in paleography, I couldn’t read it.  Not at all.

So I opened the next register.  Same thing.

By the time I got to the third one, I felt the tears welling up in my eyes, and excused myself to go out into the lobby where the coffee machine was.  Alone this time, I got a coffee and sat there, contemplating my future.  I would have to go back home and figure out something else to do, because I sure as hell couldn’t do this.  So I put the registers on reserve and went back to my apartment.

The next day, I went back to the archive[1] and began to attempt a transcription. It was awful.  And at coffee break that day, Friend (who really needs a pseudonym) asked me what was up. And I told him.

And he had me pick up a register and the transcription I had attempted and head to a private reading room with him.  And he looked at the register while I read my transcription, and stopped me and corrected me every time I was wrong, showing me exactly why the letter or word in question was something different than I had thought it was. And I made what I can only describe as sketches of the letters and ligatures as we went along, for about an hour.  Then he went back to his work, and I went back to mine.  And then we did the same thing again the next day.  And the next.  For a week and a half, he took an hour a day away from his own research.  And my sketchbook grew, to the point where I could use it to work through the documents more or less on my own.

Since then, his family has adopted me.  His mother refers to me as her “American daughter.” And I’m staying in a room in their house for the first few days, while I get my legs under me.

And tonight, Friend and I went out to see the Midsummer’s Eve celebrations (see below).  He and I have both been through some major changes over the past 14 years or so since we met.  And sometimes we argue.  But it’s one of those lifelong friendships, and it all started out with an act of generosity in the archives, one that I hope to repay, if not to him, then to some other young researcher at the point of despair. 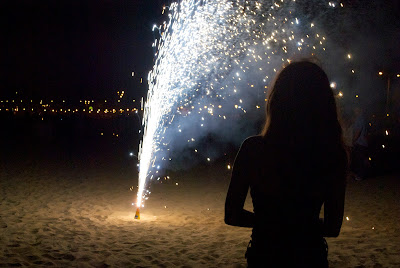 [1] Please note: this is the single most important thing you can do.  No matter how discouraged you are: go back to the archive the next day. And know that this, too, shall pass.

Labels: research and writing, something to celebrate

What a great story! I suspect that every successful person can look back and see people who were there when the going got tough and told them, "CARRY ON!"

That IS a great story. You were lucky . . . and so are the people who get helped in the future because you told this story and inspired some people to look after the newbies.

What a gift! I *wish* I'd had someone help me in that way. I never took a palaeography class, but at the suggestion of my mentor, I first worked through a document that had been edited and printed. Comparing the printed version with the original, and wildly flipping through Capelli, was my self-teaching method. It took a loooong time to get any semblance of confidence, and I still am very slow with many styles and hands.