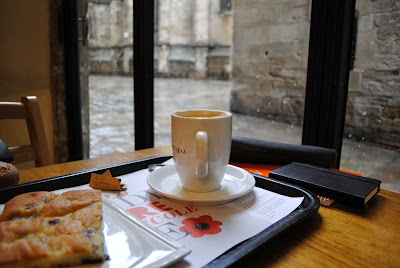 So, after an extended weekend of jetlag, errands, seeing friends, and getting the apartment (sort of) set up, and after a reinforcing morning cup of coffee, I made it back into the archives yesterday.

Now, don’t think that I just dove straight into the documents when I got there. I did not. Of course, the plan had been for last summer to be my suss-out-the-projects, locate what I needed, so I could jump right in. But what I discovered on that trip was that the project I was really excited about was going to take to long to be book #2, and the alternative was something I was unenthusiastic about. So that trip ended up being about gathering info for a project that is on the back burner – definitely simmering, but not going to be the first thing out the door.

So these first few days – this first week, in fact – is all about recon on the project idea that I finally decided on about two weeks before I left. And as far as reconaissance goes, it’s been pretty successful. I’ve been digging around in catalogues in two archives, and finding references to documents that I had missed the last time around.**

And there’s something good about recon, if you have the time: it’s a nice way to ease yourself into a work rhythm. I feel like this will be a successful trip.

**I even found document references to something that I’ve labled “Project Impossible”, because it’s a great idea, but there seem to be only a very few references. This is not even back-burner; it’s just a glimmer.
Posted by Notorious Ph.D. at 7:09 AM

For those of us who have never been in an archive and have no clue what one is like, would you be willing to post about what it looks like inside, how the catalogue works, what the physical documents look like, etc?

Sure thing! I've got another couple posts working, so I'll do this one sometime in the next week or so.