Looking on the Bright Side of an Archival Bust

So, I've now visited all of the archives in the small Blargistan city of L that have medieval documents, and I'm telling you, there is not a one that is useful to my project.

Most of L's medieval holdings are sparse. The diocesan archive at one point had mountains of documents dating back to the mid-12th century, but everything medieval and much else was destroyed in one of the wars that blew through here, and now their documents only go back to the mid-18th century. The other archives have the occasional register or bundle of parchments from my century, but I've got a project centered around a specific year, and there's almost nothing for that, other than a few documents of property sales or rentals (which might be fascinating for some projects, but not for mine).

I've spend a week here, and I've transcribed a total of three documents, all of them highly tangential to my project. But I had to do something, other than sitting here, wishing I'd spent the week in T. instead. Or even back in Blerg City.

So, what's the bright side?


Please, please let there be documents for me to dig into. 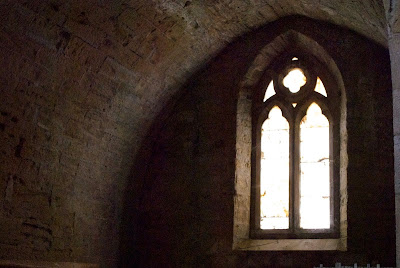 One of the photos of the nearly-deserted medieval attraction I visited yesterday.
Posted by Notorious Ph.D. at 4:47 AM

Well, at least now you know, right? I'll have to remember that detail about the diocesan archive myself...

Well, it's better than a red hot poker in the eye.

Gawd that sounds dispiriting. On the other hand it also sounds like a war story to tell once the project is long done. I find that most misfortunes are story material once told with detachment, it's a kind of comfort.